Almost every person has an appreciation for natural environments. In addition, most people find healthy or pristine locations with high biodiversity more beautiful and aesthetically pleasing than environmentally degraded locations. In a study which computed 'aesthetics' as it relates to coral reefs, a multidisciplinary group of researchers have shown that an objective computational analysis of photographic images can be used to assess the health of a coral reef.

Since antiquity, philosophers and art historians around the world have searched for universally valid criteria for aesthetic principles -- in other words, a way to quantitatively describe things like beauty and ugliness. The development of a powerful new computational approach will now allow for a more comprehensive assessment of what people find aesthetically pleasing.

Working together, mathematics, biology, and art history researchers from San Diego State University, the Getty Research Institute, and the Scripps Institution of Oceanography created a tool to computationally measure the aesthetic appearance of coral reefs. The results demonstrate that objective visual cues generated from random photographic images can be used to reliably assess both the beauty and health of coral reefs around the world.

The collaborators compiled and modified a list of 109 visual features that can be used to assess the aesthetic appeal of an image, such as the relative size, color, and distribution of discernable objects within the image, as well as texture and color intensity. They then created a computer program capable of assessing these features in images and used it to analyze more than 2,000 random photographic images of coral reefs from around the world. The program produced an aesthetic score for each reef ecosystem.

The study, 'Can we measure beauty? Computational evaluation of coral reef aesthetics,' was published Nov. 10th 2015 in the scientific open access journal PeerJ. The findings show striking similarities between the aesthetic score produced for random reef images and the health of the respective reef ecosystem as evaluated by reef scientists.

"Our results suggest that our perception of aesthetics is well-aligned with healthy, thriving ecosystems," said Andreas Haas, an SDSU postdoctoral scholar and primary researcher of the study.

The results of this unique and multidisciplinary endeavor demonstrate that human perception of aesthetic value is not purely subjective, but is influenced by inherent components of nature that indicate healthy or degraded states. Ecologists may be able to use this tool or ones like it as a quick and inexpensive approach to monitoring the status and health trajectories of coral reef communities.

"By quantifying aesthetic features of coral reef systems, this method provides a cost effective tool that also targets one of the most important socioeconomic values of coral reefs -- their natural beauty," Haas said.

The authors have also created a website using the techniques developed in this article. Anyone can upload an image to this site and get an aesthetic score back.

Web Site: The authors have created a website where anyone can upload an image and get an aesthetic score back.

Zip file of high resolution images of the infographic (in PDF and JPEG format); the images; and a PDF of this press release: http://static.peerj.com/pressReleases/2015/11/1390_media.zip

Direct link to the Infographic: http://static.peerj.com/infographic/2015/11/can-we-measure-beauty.pdf

PDF of this Press Release: http://static.peerj.com/pressReleases/2015/Press_Release_Haas.pdf

Link to the Published Version of the article: https://peerj.com/articles/1390

All works published in PeerJ are Open Access and published using a Creative Commons license (CC-BY 4.0). Everything is immediately available--to read, download, redistribute, include in databases and otherwise use -- without cost to anyone, anywhere, subject only to the condition that the original authors and source are properly attributed.

PeerJ has an Editorial Board of over 1,100 respected academics, including 5 Nobel Laureates. PeerJ was the recipient of the 2013 ALPSP Award for Publishing Innovation.

San Diego State University is a major public research institution that provides transformative experiences, both inside and outside of the classroom, for its 35,000 students. The university offers bachelor's degrees in 94 areas, master's degrees in 78 areas and doctorates in 22 areas. Students participate in research, international experiences, sustainability and entrepreneurship initiatives, and a broad range of student life and leadership opportunities. The university's rich campus life features opportunities for students to participate in, and engage with, the creative and performing arts, a Division I athletics program and the vibrant cultural life of the San Diego region. For more information, visit http://www.sdsu.edu.

The natural beauty of coral reefs attracts millions of tourists worldwide resulting in substantial revenues for the adjoining economies. Although their visual appearance is a pivotal factor attracting humans to coral reefs current monitoring protocols exclusively target biogeochemical parameters, neglecting changes in their aesthetic appearance. Here we introduce a standardized computational approach to assess coral reef environments based on 109 visual features designed to evaluate the aesthetic appearance of art. The main feature groups include color intensity and diversity of the image, relative size, color, and distribution of discernable objects within the image, and texture. Specific coral reef aesthetic values combining all 109 features were calibrated against an established biogeochemical assessment (NCEAS) using machine learning algorithms. These values were generated for ?2,100 random photographic images collected from 9 coral reef locations exposed to varying levels of anthropogenic influence across 2 ocean systems. Aesthetic values proved accurate predictors of the NCEAS scores (root mean square error < 5 for N ? 3) and significantly correlated to microbial abundance at each site. This shows that mathematical approaches designed to assess the aesthetic appearance of photographic images can be used as an inexpensive monitoring tool for coral reef ecosystems. It further suggests that human perception of aesthetics is not purely subjective but influenced by inherent reactions towards measurable visual cues. By quantifying aesthetic features of coral reef systems this method provides a cost efficient monitoring tool that targets one of the most important socioeconomic values of coral reefs directly tied to revenue for its local population. 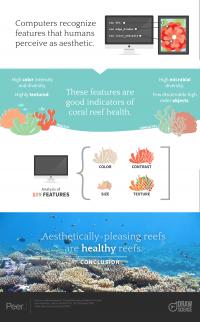 Infographic Of The Study 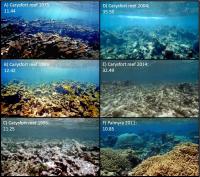 The Carysfort Reef Over Time