On the 25th of June 2016 at 22:40:16 p.m. GMT NASA's Fermi Gamma-ray Space Telescope (USA) registered a gamma-ray burst, which thereafter turned out to be just a giant burst precursor. In 31 seconds the Russian robotic telescope from the Global MASTER net of the Lomonosov Moscow State University, located in the Canary Islands (the Observatory of the Instituto de Astrofísica de Canarias, Tenerife, Spain), got Fermi's message and in another 26 seconds started scanning square errors with the help of optical cameras.

Despite great mistakes in initial coordinates of the gamma-ray burst, the whole square errors was covered by the extra-wide field cameras of MASTER-SHOCK - the terrestrial counterpart of SHOCK cameras, set up at the Lomonosov Space Observatory. Due to this fact, MASTER already targeted at the place of interest when in 131 second after the first message NASA's Space Observatory registered the very disaster with high coordinate accuracy. Now a new Global Net Center - the Crimean Taurida - MASTER of the Lomonosov Moscow State University - has joined the Canaries' MASTER. At that moment this center was operating in test mode. Taurida- MASTER got first frames at 22:44:30 p.m. - in 12 seconds after the receipt of refined coordinates.

As a result, MASTER not only did the whole movie about the burst with the best time resolution but also registered for the first time ever polarization of optical radiation of a gamma-ray burst at that moment when the burst was still lasting.

GRB160625B gamma-ray burst turned out to be one of the most powerful space bursts, emerged in a narrow stream of relativistic particles, accelerated by electromagnetic field of a rapidly rotating black hole, developing right before our very eyes at the other end of the Universe.

Vladimir Lipunov, Doctor of Physics and Mathematics, Professor at the Astronomy Division of the Faculty of Physics, Lomonosov Moscow State University, Head of Space Monitoring Laboratory at the Sternberg Astronomical Institute and MASTER project supervisor says: "Detected polarization of intrinsic optical radiation has revealed that the vent of the most powerful space cannon is developed by ordered powerful magnetic field, formed by the emerging black hole."

15 years ago, in spring 2002 a scientific team from the Lomonosov Moscow State University under the leadership of Professor Vladimir Lipunov and funded by Optika Moscow Association started elaborating a first Russian completely robotic telescope, called MASTER. The target was to make it capable of observing the most powerful and very short bursts in the Universe - namely, gamma-ray bursts, which generally last for several tens of seconds. First observations were made already in autumn 2002. During six subsequent years the team of enthusiasts registered only two gamma-ray bursts.

This large-scale astrophysical experiment became successful due to cooperation between scientists from several countries. They elaborated unique robotic equipment in gamma rays, infrared radiation and in the world's only Global MASTER optical robotic telescopes search Net, established within the framework of the development program of the Lomonosov Moscow State University with support from Optika Moscow Association. The majority of the article authors (namely, 8 people) are comprised of Russian scientists. The project has been done in collaboration with researchers from Spain, RSA, USA, Mexico, Great Britain, Italy, Israel and Australia.

By this time 8 MASTER robotic observatories, located in four continents both in the Northern and Southern hemispheres, are launched. Global MASTER Net has become a leader in early optical observations of gamma-ray bursts in the world. Besides that, MASTER has discovered more than a thousand burst events in the Universe. It has also made a decisive contribution to optical search for the source of the first gravitational wave burst, detected by LIGO (USA). Moreover, it cooperates with large neutrino facilities like ICECube (USA) and ANTARES (France). Simultaneously Global MASTER Net has discovered eight potentially dangerous asteroids.

Registration of optical radiation polarization, synchronous with gamma ray radiation, turns to be a great scientific achievement, which has been a dream for the MASTER team for long 15 years from the project start. Moreover, it's also an evidence of high quality of Russian innovation technologies, elaborated with the participation of the Lomonosov Moscow State University scientists and private sector, presented by OAO Optika Moscow Association.

Unique mathematical support, designed by Russian scientists, could be used for solving both fundamental and application research problems. Among them one could distinguish struggle with space threats, near space monitoring, space debris observation. 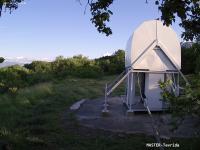