New Haven, Conn. — The initial data from the 10-year long "MiniBooNE" experiment at the Department of Energy's Fermilab significantly clarifies the overall picture of how the neutrino fundamental particles behave.

The project was designed to confirm or refute surprising observations from the Department of Energy's Los Alamos National Laboratory's Liquid Scintillator Neutrino Detector (LSND) experiments in the 1990's that were explained simply by the ability of neutrinos to transform from one type into another and back again, a process called neutrino oscillation. This research showed conclusively that there is more to the story.

A lecture by Yale Assistant Professor Bonnie Fleming, a MiniBoone project participant, will announce the results locally on Thursday, April 12 at 3:30 p.m. in room 57 of Sloane Physics Laboratories, at 217 Prospect Street. The talk is free and open to the public.

The MiniBooNE experiment mimicked the earlier Liquid Scintillator Neutrino Detector (LSND) experiment by looking for signs of muon neutrinos oscillating into electron neutrinos in the region indicated by the LSND observations. The team expected that the experiment would produce a distinct background and oscillation "signature."

The results found no appearance of electron neutrinos as predicted by a simple two-neutrino oscillation scenario ruling out the simple LSND oscillation interpretation.

The MiniBooNE team is an international collaboration of 77 researchers from 17 institutions in the United States and the U.K. working at Fermilab, with support from the Department of Energy and the National Science Foundation.

"Our results are the culmination of many years of very careful and thorough analysis. This was really an extraordinary team effort," said MiniBooNE cospokesperson Janet Conrad of Columbia University. "We know that scientists everywhere have been eagerly waiting for our results."

Neutrinos were first theorized to account for energy that seemed be to be "missing" after nuclear beta decay. But, according to Fleming, "Although they are fundamental building blocks of the universe they have been very difficult to detect and measure."

Currently, three types or "flavors" of neutrinos are known to exist: electron neutrinos, muon neutrinos and tau neutrinos. In the last 10 years, several experiments have shown that neutrinos can oscillate from one flavor to another and back. The observations made by the LSND collaboration also suggested the presence of neutrino oscillations, but in a neutrino mass region vastly different from other experiments.

"You can't see them, hear them, or touch them, but neutrinos are everywhere. They pass right by us and right through us. They can travel the distance of 200 earths lined up before they 'hit' anything, and if you put your hand on the desktop and count to 3, trillions will pass through it," she said. "And they are produced in many ways — by the sun or when stars explode, or by us using particle accelerators. So, it is important for us to understand their nature and how they behave."

Reconciling the LSND observations with the oscillation results of other neutrino experiments would have required the presence of a fourth, or "sterile" type of neutrino, with properties different from the three standard neutrinos. The existence of sterile neutrinos would throw serious doubt on the current structure of particle physics, known as the Standard Model of Particles and Forces.

Because of the far-reaching consequences of this interpretation, the LSND findings cried out for independent verification. "It was very important to verify or refute the surprising LSND result," said Robin Staffin, DOE Associate Director of Science for High Energy Physics.

For its observations, MiniBooNE relies on a detector made of a 250,000-gallon tank filled with ultrapure mineral oil, clearer than water from a faucet. A layer of 1280 light-sensitive photomultiplier tubes, mounted inside the tank, detects collisions between neutrinos made by the Booster accelerator and carbon nuclei of oil molecules inside the detector.

An assistant professor now, a part of Fleming's earlier graduate work was on creation of the photoreceptor array for the experiment. Since January 2006, the MiniBooNE experiment has been collecting data using beams of antineutrinos instead of neutrinos and expects further results from these new data.

Although the MiniBooNE researchers have decisively ruled out the interpretation of the LSND results as being due to oscillations between two types of neutrinos, there are data they observe at low energy that do not match their expectations. At this time, the source of the apparent low energy discrepancy is unknown.

"It is great to get the MiniBooNE results out," said Fermilab Director Pier Oddone. "It clears one mystery but it leaves us with a puzzle that is important to understand." The MiniBooNE collaboration will further analyze its data. 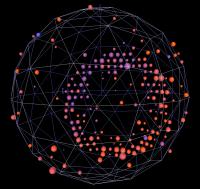