Scientists recently discovered that tiny, multilayer nanostructures inside a tarantula's hair are responsible for its vibrant color. The science behind how these hair-raising spiders developed their blue hue may lead to new ways to improve computer or TV screens using biomimicry.

Researchers from Scripps Institution of Oceanography at UC San Diego and University of Akron found that many species of tarantulas have independently evolved the ability to grow blue hair using nanostructures in their exoskeletons, rather than pigments. The study, published in the Nov. 27 issue of Science Advances, is the first to show that individual species evolved separately to make the same shade of a non-iridescent color, one that doesn't change when viewed at different angles.

Since tarantulas' blue color is not iridescent, the researchers suggest that the same process can be applied to make pigment replacements that never fade and help reduce glare on wide-angle viewing systems in phones, televisions, and other devices.

"There is strikingly little variety in the shade of blue produced by different species of tarantulas," said Dimitri Deheyn, a Scripps Oceanography researcher studying marine and terrestrial biomimicry and coauthor of the study. "We see that different types of nanostructures evolved to produce the same 'blue' across distant branches of the tarantula family tree in a way that uniquely illustrates natural selection through convergent evolution."

Unlike butterflies and birds that use nanostructures to produce vibrant colors to attract the attention of females during display courtship, tarantulas have poor vision and likely evolved this trait for a different reason. While the researchers still don't understand the benefits tarantulas receive from being blue, they are now investigating how to reproduce the tarantula nanostructures in the laboratory.

The tarantula study is just one example of the biomimicry research being conducted in the Deheyn lab at Scripps Oceanography. In a cover article in the Nov. 10 of Chemistry of Materials, Deheyn and colleagues published new findings on the nanostructure of ragweed pollen, which shows interesting optical properties and has possible biomimicry applications. By transforming the pollen into a magnetic material with a specialized coating to give it more or less reflectance, the particle could adhere in a similar way that pollen does in nature while being able to adjust its visibility. The researchers suggest this design could be applied to create a new type of tagging or tracking technology.

Using a high-powered microscope, known as a hyperspectral imaging system, Deheyn is able to map a species' color field pixel by pixel, which correlates to the shape and geometry of the nanostructures and gives them their unique color.

"This unique technology allows us to associate structure with optical property," said Deheyn. "Our inspiration is to learn about how nature evolves unique traits that we could mimic to benefit future technologies."

In addition to Deheyn, the Science Advances paper's coauthors include Bor-Kai Hsiung, Matthew Shawkey and Todd Blackledge of the University of Akron.

The University of California, San Diego is a student-centered, research-focused, service-oriented public institution that provides opportunity for all. Recognized as one of the top 15 research universities worldwide and born of a culture of collaboration, UC San Diego sparks discoveries that advance society, drive economic growth and positively impact the world. Our students, who learn from Nobel laureates, MacArthur Fellows and National Academy members, are committed to public service. For the sixth consecutive year, UC San Diego has been ranked first in the nation based on research, civic engagement and social mobility. We are one campus with multiple pillars of excellence, a top ten public university that is transforming lives, shaping new disciplines and advancing the frontiers of knowledge. Learn more at http://www.ucsd.edu. 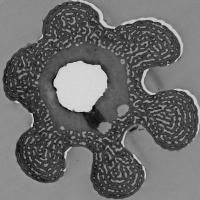