Physicists at the University of California at Berkeley have produced images that show how light can control some of the smallest possible machines. By shining ultraviolet laser light on tiny molecules of azobenzene adhered on a layer of gold, they could force the molecules to change shape at will. Potentially, the molecules could be incorporated into nanomachines in the form of remotely controlled switches, pistons or other movable components.

Scientists have experimented with shape-shifting azobenzene in previous studies, but the molecules only responded properly when suspended in liquids or incorporated into plastics, neither of which makes a very good foundation for complex nanomachines. In order to get the molecular machines to function while mounted on a gold surface, the physicists first had to add legs built of carbon and hydrogen atoms to hold the molecules slightly away from the metal. Although the legs anchoring the molecules to the surface only provided a fraction of a nanometer of clearance (less than a billionth of a meter), it was enough to allow the molecules to move in response to the UV illumination.

The team confirmed their achievement with a series of scanning tunneling microscope images showing that they could switch the molecules' shapes from one configuration and back again. - JR

A team of physicists at the Low Temperature Laboratory in Helsinki, Finland have built the world's first heat transistor. A working prototype, which uses an electrical signal to control the flow of heat, measures only a few millionths of a meter across.

Despite the name, a heat transistor can also provide cooling. After all, chilling involves ensuring that heat flows away from object rather than toward it. As a result, heat transistors are likely to become important components in tiny refrigerators and heaters, as well as leading to sensitive new devices for measuring temperature and heat flow. - JR

A steel ball dropped into loose, fine sand makes an impressive splash, according to physicists of the Physics of Fluids group investigating the fluid-like properties of sand at the University of Twente in the Netherlands. Such considerations factor into designing a rover to land on and move about Martian dunes or other dusty surfaces.

Just as a cannon-ball dive into a pool will send a plume of water into the air, the researchers led by Detlef Lohse found that the steel ball was instantly engulfed by the fine sand, sending up a dust plume with a height that depended on the air pressure. When they decreased the air pressure in the experiment, they found that the ball penetrated less deeply into the sand and sent up a shorter plume.

It's natural that the plume height varies with the depth of the ball's penetration into the dust because the plume is caused by the sudden collapse of the cavity formed by the steel ball's impact. Higher air pressure causes greater air-sand mixing near the surface of the ball which leads to reduced friction and more fluid-like behavior. Reduced friction means deeper penetration thus a higher plume.

Most astrophysics researchers prefer that their rovers are not buried on impact, which makes low-pressure atmospheres more favorable for landing robots on dusty planets. Luckily, the atmospheric pressure on Mars is only about 1% of the pressure here on Earth. - KM

North Carolina State University physicists have recently deduced a way to improve high-energy-density capacitors so that they can store up to seven times as much energy per unit volume than the common capacitor. High performance capacitors would enable hybrid and electric cars with much greater acceleration, better and faster steering of rockets and spacecraft, better regeneration of electricity when using brakes in electric cars, and improved lasers, among many other electrical applications.

A capacitor is an energy storage device. Electrical energy is stored by a difference in charge between two metal surfaces. Unlike a battery, capacitors are designed to release their energy very quickly. They are used in electric power systems, hybrid cars, and all kinds of electronics.

The amount of energy that a capacitor can store depends on the insulating material in between the metal surfaces, called a dielectric. A polymer called PVDF has interested physicists as a possible high-performance dielectric. It exists in two forms, polarized or unpolarized. In either case, its structure is mostly frozen-in and changes only slightly when a capacitor is charged up. Mixing a second polymer called CTFE with PVDF results in a material with regions that can change their structure, enabling it to store and release unprecedented amounts of energy.

The team, led by Vivek Ranjan, concluded that a more ordered arrangement of the material inside the capacitor could further increase the energy storage of new high-performance capacitors, which already store energy four times more densely than capacitors used in industry. Their predictions of higher energy density capacitors are encouraging, but have yet to be experimentally tested. - KM 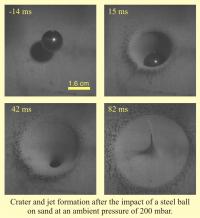