Understanding how cooperation evolves and is maintained represents one of evolutionary biology's thorniest problems. This stems from the fact that freeloading cheats will evolve to exploit any cooperative group that doesn't defend itself, leading to the breakdown of cooperation. New research using the bacterium Pseudomonas fluorescens has identified a novel mechanism that thwarts the evolution of cheats and broadens our understanding of how cooperation might be maintained in nature and human societies. The new findings are reported by Michael Brockhurst of the University of Liverpool and colleagues at the Université Montpellier and the University of Oxford in the October 24th issue of the journal Current Biology, published by Cell Press.

Bacteria are known to cooperate in a wide variety of ways, including the formation of multicellular structures called biofilms. P. fluorescens biofilms are formed when individual cells overproduce a polymer that sticks the cells together, allowing the colonization of liquid surfaces. While production of the polymer is metabolically costly to individual cells, the biofilm group benefits from the increased access to oxygen that surface colonization provides. However, cheating types rapidly evolve that live in the biofilm but don't produce the polymer. The presence of cheats weakens the biofilm, imperiling its survival by causing it to sink.

In the new work, the researchers studied the effect of short-term evolution of diversity within the biofilm on the success of cooperation. The researchers found that within biofilms, diverse cooperators evolved to use different nutrient resources, thereby reducing the competition for resources within the biofilm. The researchers then manipulated diversity within experimental biofilms and found that diverse biofilms contained fewer cheats and can produce larger groups than non-diverse biofilms. The findings indicate that, as in ecological communities, biodiversity within biofilms is beneficial--moreover, the authors point out that this is the first time that such ideas have been applied in the context of social evolution, and it represents a new way in which cooperation can survive in the face of cheating. Furthermore, the new work sheds light on how division of labor within multicellular organisms may initially have evolved in order to minimize functional redundancy among cells and to increase efficiency. 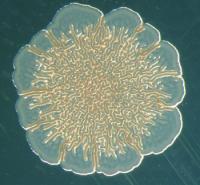