An international team of scientists has discovered that the female ancestor of all living polar bears was a brown bear that lived in the vicinity of present-day Britain and Ireland just prior to the peak of the last ice age -- 20,000 to 50,000 years ago. Beth Shapiro, the Shaffer Associate Professor of Biology at Penn State University and one of the team's leaders, explained that climate changes affecting the North Atlantic ice sheet probably gave rise to periodic overlaps in bear habitats. These overlaps then led to hybridization, or interbreeding -- an event that caused maternal DNA from brown bears to be introduced into polar bears. The research, which is led by Shapiro and Daniel Bradley of Trinity College Dublin, is expected to help guide future conservation efforts for polar bears, which are listed as threatened under the Endangered Species Act. The results of the study will be published on 7 July 2011 in the journal Current Biology.

Polar and brown bears are vastly different species in terms of body size, skin and coat color, fur type, tooth structure, and many other physical features. Behaviorally, they are also quite distinct: Polar bears are expert swimmers that have adapted to a highly specialized, arctic lifestyle, while brown bears -- a species that includes Grizzlies and Kodiaks -- are climbers that prefer the mountain forests, wilderness regions, and river valleys of Europe, Asia, and North America. "Despite these differences, we know that the two species have interbred opportunistically and probably on many occasions during the last 100,000 years," Shapiro said. "Most importantly, previous research has indicated that the brown bear contributed genetic material to the polar bear's mitochondrial lineage -- the maternal part of the genome, or the DNA that is passed exclusively from mothers to offspring. But, until now, it was unclear just when modern polar bears acquired their mitochondrial genome in its present form."

Although previous researchers had suggested that the ancient female ancestor of modern polar bears lived on the ABC Islands -- the Alaskan islands of Admiralty, Baranof, and Chichagof -- only 14,000 years ago, Shapiro's team found evidence of a much earlier hybridization event. Because of this event, the modern polar bear's mitochondrial DNA probably underwent fixation -- a drastic reduction in genetic variation and a transition to a state in which the entire gene pool includes only one form of a particular gene. After performing genetic analyses of 242 brown-bear and polar-bear mitochondrial lineages sampled throughout the last 120,000 years and across multiple geographic ranges, Shapiro's team found that the fixation of the mitochondrial genome likely occurred during or just before the peak of the last ice age, possibly as early as 50,000 years ago, near present-day Ireland. Shapiro noted that the specific population of brown bears that shared its maternal DNA with polar bears has been extinct for roughly 9,000 years. However, her data offer clear genetic evidence that the two species were in contact long before the brown bear's disappearance from the British Isles.

Shapiro explained that, although both polar bears and brown bears have experienced long periods of geographic stability, episodes of both warming and cooling during the last 500,000 years or more likely led to environmental conditions favorable to hybridization between the two bear species. "Polar and brown bears likely came into contact intermittently, in particular in coastal regions where the effects of climate change may have been more pronounced," Shapiro said. "Whenever they come into contact, there seems to be little barrier to their mating."

Such climate changes, Shapiro said, included vast fluctuations in the amount and distribution of habitats in the North Atlantic region. These fluctuations would have caused the geographic ranges of polar and brown bears to overlap temporarily. For example, during a warming period, elevated air temperatures, melting glacial ice, and rising sea levels likely forced polar bears to spend more time onshore in search of food, and thus closer to their brown-bear neighbors. Likewise, during a cooling glacial period, brown bears living farther from the coast may have been forced into habitat normally occupied by polar bears. The British-Irish Ice Sheet reached its maximum extent about 20,000 years ago, with major tidewater glaciers on the western shelf and down the Irish Sea Basin into the Celtic Sea. During this period, parts of Ireland were probably uninhabitable because of glaciation, pushing brown bears toward ice shelves and land exposed by lower sea levels. "The bottom line is that the two species bumped up against one another for extended periods of time on different occasions, sharing both habitats and genes," Shapiro said.

Climatological data suggest that the planet now is experiencing another warming period -- known as the Holocene or the Present Interglacial -- which is even warmer than the period that marked the beginning of the last ice age. "Interestingly, today we are seeing a similar change in the arctic climate, with melting glacial ice, fewer sea-ice days, longer open-water periods during summer, and rising sea levels," Shapiro said. "And once again that change is providing polar and brown bears the opportunity to share habitats and to hybridize. In fact, several adult hybrid bears have been reported in the last five years." For this reason, Shapiro said, scientists should reconsider conservation efforts focused not just on polar bears, but also on hybrids, since hybrids may play an underappreciated role in the survival of certain species. She added that a thorough understanding of the polar bear's deep genetic history and its response to previous environmental changes could help to inform conservation strategies for the dwindling population of polar bears today.

Shapiro hopes to design future studies of the polar bear's DNA by concentrating on other parts of the animal's genome. "Until now we have focused our efforts on the polar bear's mitochondrial DNA, which traces only the mother's side of the family tree," Shapiro said. "But there is much to be learned from the nuclear genome -- the genetic material contained within the nucleus of the cell, which has been passed to offspring from both mothers and fathers." Shapiro said that a more complete investigation of this part of the genetic story could answer deeper questions about how interactions with other species and environmental changes affected the polar bear in the distant past, how frequently hybridizations between species actually happened, and how these hybridizations affected the genetic diversity of the polar bear generally.

In addition to Shapiro and Bradley, other researchers who contributed to the study include Tara L. Fulton at Penn State and scientists at universities and institutions in California, Ireland, the United Kingdom, Belgium, Spain, Denmark, Russia, and Sweden. The sequencing of ancient Irish and British bears was carried out by Ceiridwen Edwards at Trinity College Dublin, where the unprecedented similarity with polar bears was first noted.

Funding for the research was provided by the European Research Council; the National Evolutionary Synthesis Center (NESCent); the Irish Council for Science, Engineering, and Technology; and the U.S. National Science Foundation.

IMAGES High-resolution images associated with this research are online at http://www.science.psu.edu/news-and-events/2011-news/Shapiro6-2011, which is where text will be posted after the embargo lifts. 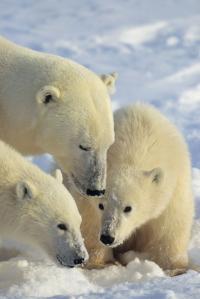 Ancestry of Polar Bears Traced to Ireland (2 of 3) 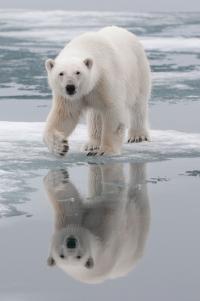 Ancestry of Polar Bears Traced to Ireland (3 of 3)