CHAMPAIGN, Ill. -- Brown-headed cowbirds have a reputation for being deadbeat parents: They lay their eggs in other birds' nests and then disappear, the story goes, leaving the care and feeding of their offspring to an unwitting foster family. A new study suggests, however, that cowbird moms pay close attention to how well their offspring do, returning to lay their eggs in the most successful host nests, and avoiding those that have failed.

The new findings are reported in the Proceedings of the Royal Society B.

"Cowbirds may be paying attention not only to their own reproductive success, but to other cowbirds' as well," said University of Illinois Ph.D. student Matthew Louder, who led the study with Illinois Natural History Survey avian ecologist Jeff Hoover and INHS biological surveys coordinator Wendy Schelsky. "No one's ever suggested before that cowbirds or even other brood parasites pay attention to their own reproductive success." Louder is now a postdoctoral researcher with East Carolina University in North Carolina and Hunter College in New York.

Cowbirds are native to North America and are one of only a few bird species that engage in brood parasitism, the practice of tricking other species into raising one's young, the researchers said. Other brood parasites include the cuckoo, which targets nests with eggs that look very similar to its own. Some host species recognize foreign species' eggs and roll them out of the nest.

A previous study from Hoover and Scott Robinson, of the Florida Museum of Natural History, found that some female cowbirds notice when a host bird has ejected their eggs, and will ransack the "offender's" nest. Hoover calls this behavior "mafia-like retaliation." Some cuckoos also do this.

"There were a lot of implications of that earlier work, and one of them was that cowbird females aren't abandoning their eggs in another species' nest; they're paying attention, to a certain point," Hoover said. "And so we wondered how long they continued to pay attention."

In the new study, the cowbirds targeted prothonotary warblers nesting in experimental nest boxes that the researchers had modified to exclude predators. The researchers manipulated events in the nests to clarify whether the cowbirds randomly selected hosts or if the previous performance of a nest - in terms of cowbird survival - became a factor in their nest selection. The researchers removed cowbird eggs from some of the warbler nests and left them in others. They tracked whether the cowbird nestlings - and the warblers - survived to fledging age.

"We try to discriminate between host success and cowbird success," Schelsky said. "The cowbirds might be selecting nests where young cowbirds succeed, but they might also prefer nests where the warblers are doing well, and not pay attention to cowbird survival."

The team found that the nests that successfully hosted cowbirds were much more likely to be parasitized again, while those that failed to fledge cowbirds were significantly less likely to be targeted by cowbird females the next time around.

"They're learning both from success and from failure," Hoover said.

While they are unable to say whether the same females are targeting the same nests again and again, the researchers said it is likely that that is the case.

The Illinois Natural History Survey is a division of the Prairie Research Institute at the U. of I.

The paper "A generalist brood parasite modifies use of a host in response to reproductive success" is available online or from the U. of I. News Bureau. 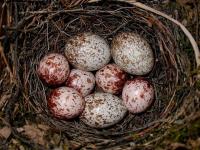 Jeff Hoover and Wendy Schelsky, University of Illinois at Urbana-Champaign