Our bodies are breeding grounds for microbes -- don't worry, it's a good thing! As scientists have been telling us for years, not all microbes are bad. Many active enzymes and bacteria are merely benign, and, in moderation, are beneficial to humans as an important part of our digestive system or can help regulate our immune system.

Candida albicans, an opportunistic yeast pathogen and model organism for research, is common and usually doesn't damage our healthy personal ecosystem. However, when our immune system is stressed on Earth or in space, such as during long-duration space travel, C. albicans can grow out of control and potentially cause infections. Scientists want to address controlling these outbreaks with the next round of cellular growth experiments on the International Space Station -- Micro-8.

Results from a recent set of tests on the station, called Micro-6, encouraged further study into the impact of spaceflight on the cellular behavior of these microbes. During the investigation, scientists discovered C. albicans grew to a more elongated form, grew into an altered structure when forming a colony and, perhaps most importantly, showed an increased resistance to the antimicrobial agent Amphotericin B. The combination of these factors could result in an increase of the infectious nature of this opportunistic pathogen.

This is why scientists will continue to study C. albicans in Micro-8, scheduled for delivery on the fourth commercial cargo resupply flight of the SpaceX Dragon spacecraft, targeted to launch Sept. 20, 2014. The investigation on the orbiting laboratory will allow scientists to better understand the growth and development of these microbes, which, in turn, can help develop treatment for infections both in space and on Earth.

"We already understand a great deal about this particular yeast," said Sheila Nielsen, Ph.D., principal investigator for the Micro-6 and Micro-8 missions at Montana State University in Bozeman. "Previous studies have given us a broad set of benchmarks, including the sequence of the entire genome, which makes Candida albicans a great subject for study in microgravity because we have extensive information to compare it to."

Designed to examine how spaceflight affects potentially infectious organisms, the Micro-8 investigation will provide new insights into better management and treatment of C. albicans infections when they occur on Earth as well as in space, and may offer ways to combat other microbial pathogens. By comparing the cells grown in microgravity to cells grown in gravity, the research team will examine several parameters, including the susceptibility of the yeast to antimicrobial agents.

Micro-8 will directly build on the Micro-6 study. It also will include a second antifungal agent to better understand the yeast response to different antimicrobial agents.

One of the most important evolutions of the Micro-8 investigation is the introduction of human monocytes -- or blood cells -- as a host. Astronauts on the orbiting laboratory will test the yeast growth on monocytes in an enclosed and controlled facility called the Commercial Generic Bioprocessing Apparatus (CGBA). The CGBA is an incubator capable of controlling the temperature between 46 and 98 degrees F.

"We have already demonstrated that microgravity affects cell shape and behavior," said Nielsen. "A more complete understanding of the yeast adaptation response to extreme environments, such as microgravity, and the risks associated with potential infection is vital for long-term crew health and safety. With that knowledge, we can develop treatments to keep our astronauts and our Earth population healthier."

Micro-8 is funded and managed through NASA Space Biology at NASA's Ames Research Center in Moffett Field, California. The payload developer is BioServe Space Technologies in Boulder, Colorado. Space Biology is funded by the Space Life and Physical Sciences Research and Applications Division within the Human Exploration and Operations Mission Directorate at NASA Headquarters in Washington.

So, while we don't want to eliminate all of the bacteria and yeast microbes from our system, scientists are using the orbiting laboratory to discover ways to keep them in check on Earth and in space.

Everything in moderation: Micro-8 to study regulating pathogens in space 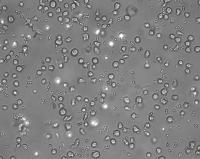