A team of international researchers, led by the University of Bologna, has discovered the fossilised remains of methane-cycling microbes that lived in a hydrothermal system beneath the seafloor 3.42 billion years ago.

The microfossils are the oldest evidence for this type of life and expand the frontiers of potentially habitable environments on the early Earth, as well as other planets such as Mars.

The study, published in the journal Science Advances, analysed microfossil specimens in two thin layers within a rock collected from the Barberton Greenstone Belt in South Africa. This region, near the border with Eswatini and Mozambique, contains some of the oldest and best-preserved sedimentary rocks found on our planet.

The microfossils have a carbon-rich outer sheath and a chemically and structurally distinct core, consistent with a cell wall or membrane around intracellular or cytoplasmic matter.

Prof Barbara Cavalazzi, the lead author of the study, said: "We found exceptionally well-preserved evidence of fossilised microbes that appear to have flourished along the walls of cavities created by warm water from hydrothermal systems a few meters below the seafloor. Sub-surface habitats, heated by volcanic activity, are likely to have hosted some of Earth's earliest microbial ecosystems and this is the oldest example that we have found to date."

The interaction of cooler sea-water with warmer subsurface hydrothermal fluids would have created a rich chemical soup, with variations in conditions leading to multiple potential micro-habitats. The clusters of filaments were found at the tips of pointed hollows in the walls of the cavity, whereas the individual filaments were spread across the cavity floor.

Chemical analysis shows that the filaments include most of the major elements needed for life. The concentrations of nickel in organic compounds provide further evidence of primordial metabolisms and are consistent with nickel-content found in modern microbes, known as Archaea prokaryotes, that live in the absence of oxygen and use methane for their metabolism.

"Although we know that Archaea prokaryotes can be fossilised, we have extremely limited direct examples. Our findings could extend the record of Archaea fossils for the first time into the era when life first emerged on Earth," said Prof Cavalazzi.

She added: "As we also find similar environments on Mars, the study also has implications for astrobiology and the chances of finding life beyond Earth."

The research was carried out with the support of Europlanet 2024 RI, which received funding from the European Union's Horizon 2020 programme (Grant No 871149). 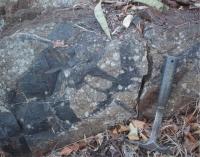 The outcrop from which the rock sample was taken