The ground squirrel and the Syrian hamster, two rodents that hibernate in the winter, do not feel cold in the same way as non-hibernators, such as rats or mice. Yale researchers have discovered that hibernating rodents evolved cold-sensing neurons with diminished ability to detect temperatures below 20 degrees Celsius. This adaptation potentially allows their body temperature to drop for long periods of time without causing them to feel stressed by these conditions, thus triggering their seasonal slumber. The work appears December 19 in the journal Cell Reports.

The Gracheva lab, in collaboration with Sviatoslav Bagriantsev's group, who together make up the sensory physiology labs at Yale, found that ground squirrels and Syrian hamsters evolved similar cold-suppressing adaptations independently. While all rodents have receptors on their somatosensory neurons that sense cold, the receptors in these two hibernating animals take a lot more to be activated compared to those in animals that do not hibernate.

In order to compare the biology of animals that hibernate and those that do not, the researchers performed tests on ground squirrels, hamsters, and mice. They put the rodents on two temperature-controlled plates: one warm plate (30 degrees Celsius) and another cooler plate that changed temperature (from 20 to 0 degrees Celsius). The rodents could move between the two plates. The researchers observed that mice always strongly preferred the warm plate. Ground squirrels and hamsters, on the other hand, did not show significant preference for the warm plate, unless the cold plate approached 5 degrees Celsius.

Gracheva and Bagriantsev connected this behavior to an ion channel in neurons of these rodents, called TRPM8. The activation of TRPM8 leads to the sensation of feeling cold. In ground squirrels and hamsters, TRPM8 is less sensitive to cold than TRPM8 in mice. In mice, there was an increase in activity when the temperature decreased from 30 to 10 degrees Celsius, but in the ground squirrels and hamsters, there was no change even at temperatures below 20 degrees Celsius. The researchers analyzed the differences in the amino acid sequence of the TRPM8 molecules and reverse-engineered squirrel TRPM8 so that it became sensitive to cold again.

This resistance to feeling cold occurs not only when ground squirrels and hamsters are hibernating but also while they are active. For example, 13-lined ground squirrels (so-called for their 13 brown and white stripes) can survive exposure to temperatures of 2 degrees Celsius for up to 6-9 months. The ground squirrels, which are related to chipmunks, are native to Wisconsin.

Other species, like birds, can migrate to change their environment when the weather gets too cold. Smaller mammals, on the other hand, cannot travel long distances. Instead of changing their environment, they must adapt and change their bodies. "This adaptation is the perfect example of how environment can shape properties of the sensory system," says Gracheva.

Moving forward, the Gracheva lab and colleagues are studying how these animals behave in even lower temperatures. The next step for her team is studying rodents at temperatures below 10 degrees Celsius. They also want to expand their study of the molecular basis for cold sensitivity. "This process is very complex, and TRPM8 is just one part of the mechanism," says Gracheva. 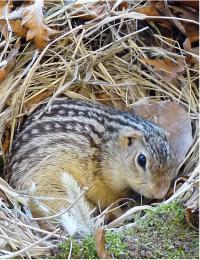