While humans may struggle to navigate a murky, turbid underwater environment, weakly electric fish can do so with ease. These aquatic animals are specially adapted to traverse obscured waters without relying on vision; instead, they sense their environment via electric fields. Now, researchers are attempting to adapt these electrosensing techniques to improve underwater robotics.

Scientists have spent years studying how weakly electric fish--including the knife fish and elephantnose fish--utilize electricity for navigation. These fish have specialized electric organs that discharge small voltages into the surrounding water, creating their own personal electric fields. Nearby objects cause slight disruptions to these fields, which the fish detect with sensitive organs on their skin called electroreceptors. As a fish swims around, it can sense an object from multiple viewpoints to learn more about its features -- all without gaining any visual perspective. Fully understanding the mechanisms of this unique adaptation that allows fish to orient themselves and navigate in complete darkness could help underwater robots do the same.

Lorenzo Baldassari and Andrea Scapin of the Swiss Federal Institute of Technology in Zürich were intrigued by the possibility of modeling the way in which weakly electric fish perceive their environments through electricity. In a paper publishing on Thursday in the SIAM Journal on Imaging Sciences, Baldassari and Scapin introduce an innovative algorithm for observing objects via electrosensing that is based on the real behavior of weakly electric fish. "These animals are an ideal subject for developing new bio-inspired imaging techniques," Baldassari said.

Weakly electric fish's impressive sensing capabilities inspired the duo to develop an algorithm that could emulate how the fish detect and locate a target based on the distribution of electrical current over their skin. They sought to create a mathematical simulation of a fish that would swim in circular paths around a target object and incorporate a recognition algorithm that could synthesize the electrosensed information to determine what object the fish was near.

The algorithm needed to know the possible shapes of this object, so Baldassari and Scapin established a dictionary of seven standard shapes: a circle, ellipse, triangle, bent ellipse, curved triangle, gingerbread man, and drop. In their simulation, a fish swam around a randomly-selected object from the dictionary -- this theoretical fish did not know beforehand what kind of object it would encounter, just like a real fish does not know about its environment before electrosensing it. The algorithm's goal was then to use the data collected by the simulated fish to determine which dictionary element matched the target object.

The most important mathematical quantity in this simulation was the length-scale, or the ratio between the target's size and the distance between the fish and the target. As the length-scale increases--i.e., the fish moves closer to the target--the size of the electrical disturbance from the target also increases, providing a higher-resolution view of the object. Previous studies involving electrosensing algorithms only utilized measurements taken at one length-scale. To improve upon this technique, Baldassari and Scapin had their modeled fish take multiple circular orbits at different distances from the target, thereby obtaining measurements at several different length-scales. This multi-scale approach combines information that the theoretical fish gathers at different distances from the object to gain a more accurate understanding of its features. But the advantages of multi-scale did not come easily. "The most difficult aspect of this work was choosing a proper way for combining the information at multiple length-scales," Scapin said. The authors attempted multiple methods before finally landing on a strategy for combining the information that did not have any major drawbacks.

For the recognition algorithm that worked best, the first step was to measure and record the electric perturbation from the target that the fish detected upon each orbit. A matching procedure then compared this data to the dictionary of possible shapes, giving a numerical score to indicate the degree of similarity between the unknown target and the dictionary item that it most resembled. This score was saved for later combination. "The strong point of our recognition algorithm is that when performing the classifications orbit-by-orbit, previous comparisons are incorporated in the selection of the best matching shape," Scapin said. "This leads to an enhancement in the recognition." The team combined the numerical scores from different orbits to create a belief assignment that denoted which dictionary shape the algorithm determined was the best match for the target, and how confident it was in that determination.

To test their recognition algorithm, the authors simulated a fish with 1,024 electroreceptors evenly distributed on its body that made three circular orbits around an object, then recorded how often it was able to correctly identify the target. This new multi-scale approach had a higher rate of correct recognition than previous single-scale approaches; although fusing the results from different length-scales did not produce the best outcome every single time, it was the most effective approach overall. According to these results, future advancements in electrosensing algorithms will be most successful if they continue to incorporate multi-scale measurements.

Baldassari and Scapin's new electrosensing algorithm has the potential to advance navigation in underwater robotics, though applying their procedure to real devices would require extending the algorithm to handle three dimensions. However, the potential rewards for such an effort are tantalizing. "Building autonomous robots with electrosensing technology may supply unexplored navigation, imaging, and classification capabilities, especially when sight is unreliable due to the turbidity of the surrounding waters or poor lighting conditions," Baldassari said. Electrosensing robots could enable a deeper study of areas of the ocean that are inaccessible to human divers, advancing undersea exploration further than ever before. 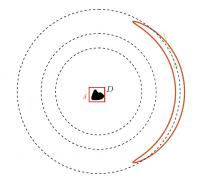 Orbits of fish around target in electrosensing algorithm