The evolution of new species might not be as hard as it seems, even when diverging populations remain in contact and continue to produce offspring. That's the conclusion of studies, reported in the Cell Press journal Cell Reports on October 31st, that examine the full genome sequences of 32 Heliconius butterflies from the Central American rain forest, representing five different species.

"The butterflies have performed a beautiful natural experiment for us that lets us address important questions about evolution," said Marcus Kronforst of the University of Chicago. "Even as biologists, we often think of the origin of new species as a moment in time when a new species splits from an old one, and this type of thinking is reflected in the evolutionary 'trees,' or phylogenies, that we draw. In reality, evolution is a long-term process that plays out in stages, and speciation is no different."

Kronforst and his colleagues found that the initial divergence between butterfly populations is restricted to a small fraction of the genome. In the case of the butterflies, the key genes are those involved in wing patterning. The butterfly species under study all have very different wing patterns, which are important in the butterflies' mating behavior and predator avoidance.

Comparison of those closely related, interbreeding species to a slightly more distant third species showed that hundreds of genomic changes had arisen rather quickly in evolutionary time sometime after those early differences took hold.

"We find that only a small fraction of the genome is markedly different between closely related species, but then much more of the genome—more than you'd expect—shows similar differences between more distantly related species," Kronforst explained. "That indicates that the genetic changes that are important for causing speciation are tightly clustered early in speciation, but not so later on in the process; the overall pattern of genome divergence starts slow and then skyrockets."

The researchers view the process as a kind of tug-of-war between natural selection and gene flow. The result in the case of the butterflies has been a rapid divergence of species, driven by a combination of new mutations and borrowed genes. The butterfly genomes also show that the same spots in the genome have been important in multiple speciation events.

"Beyond butterflies, it is possible that this type of speciation, in which natural selection for ecology causes the origin of new species, has been important in the evolution of other organisms," Kronforst said.

Butterflies show origin of species as an evolutionary process, not a single event 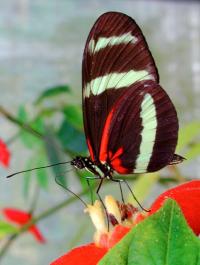 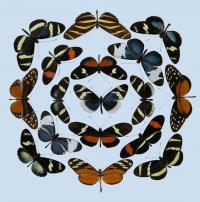