Washington, DC--A team of scientists led by Carnegie's Shaunna Morrison and including Bob Hazen have revealed the mineralogy of Mars at an unprecedented scale, which will help them understand the planet's geologic history and habitability. Their findings are published in two American Mineralogist papers.

Minerals form from novel combinations of elements. These combinations can be facilitated by geological activity, including volcanoes and water-rock interactions. Understanding the mineralogy of another planet, such as Mars, allows scientists to backtrack and understand the forces that shaped their formation in that location.

An instrument on NASA's Mars Curiosity Rover called the Chemistry and Mineralogy Instrument, or CheMin, is the first tool of its kind ever to operate on another planet. But there are limitations to how much it can tell scientists about the Red Planet's minerals--how they formed and what they can illuminate about Martian history.

But Morrison found a way to glean even more information from the CheMin data, information which paints a detailed picture of the minerals the rover encountered on Mars.

CheMin is able to discern what types of minerals exist on Mars and in what proportions they are found. But until this latest work from Morrison, scientists didn't have the calibration capabilities to measure the precise composition or crystal chemistry of those minerals from CheMin data alone. For example, CheMin told Earth-bound scientists that certain types of feldspar exist on Mars, but it did not provide the level of detail that can give mineralogists vital clues about the conditions under the feldspars formed.

Crystals, by definition, have a long-range repetitive structure. The smallest unit of the geometry of this crystal lattice is called the unit cell, comprised of repeating atomic units. Morrison realized that because the unit cell dimensions for minerals found in the 13 samples CheMin took of the soils, sandstones, and formations of Mar's Gale Crater are known, she could use them as a key to unlock more information about the minerals sampled by CheMin.

"I scoured the literature, gathering and analyzing thousands of measurements of both mineral compositions and unit cell dimensions and then determined a mathematical connection between them," Morrison explained. "Once this relationship was established, it could be used to glean much more detail about the minerals in the Martian samples taken by CheMin."

For example, CheMin was able to measure that Mars' Gale Crater contains the minerals feldspar and olivine. Using Morrison's connection between unit cells and compositions, the team was able to determine how the composition of feldspar varies between the different sampling locations, which can offer information about its igneous origins. In addition, the percentage of magnesium found in olivine samples range from 52 to 72 percent, which when compared with Martian meteorites may offer information about aqueous alteration of the material.

"Thanks to Shaunna's creative approach, we have improved CheMin's resolution by an order of magnitude," Hazen explained. "The result is the most vivid picture yet of the mineralogy of another planet." 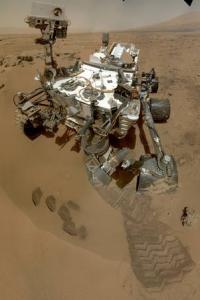