Nearly 15 million blood transfusions are performed each year in the U.S., and pediatric patients alone receive roughly 425,000 transfused units. Endocrine-disrupting chemicals, such as bisphenol A and di-2-ethylhexyl-phthalate (DEHP), can leach from some plastic devices used in such transfusions. However, it remains unclear how many complications following a transfusion can be attributed to the interplay between local and systemic reactions to these chemical contaminants.

The National Heart, Lung and Blood Institute within the National Institutes of Health has awarded a $3.4 million, five-year grant to Nikki Gillum Posnack, Ph.D., assistant professor at the Sheikh Zayed Institute for Pediatric Surgical Innovation (SZI) at Children's National Health System, to answer that question and to provide insights that could accelerate development of safer biomaterials.

According to the Food and Drug Administration, patients who are undergoing IV therapy, blood transfusion, cardiopulmonary bypass or extracorporeal membrane oxygenation or who receive nutrition through feeding support tubes have the potential to be exposed to DEHP.

Posnack led a recent study that found that an experimental model exposed to DEHP experienced altered autonomic regulation, heart rate variability and cardiovascular reactivity and reported the findings Nov. 6, 2017, in the American Journal of Physiology. The pre-clinical model study is the first to show such an association between phthalate chemicals used in everyday medical devices like IV tubing and cardiovascular health.

In the follow-on research, Posnack and colleagues will:

"Ultimately, we hope to strengthen the evidence base used to inform decisions by the scientific, medical and regulatory communities about whether chemical additives that have endocrine-disrupting properties should be used to manufacture medical devices," Posnack says. "Our findings also will highlight incentives that could accelerate development of alternative biomaterials, additives and fabrication techniques to improve safety for patients undergoing transfusion." 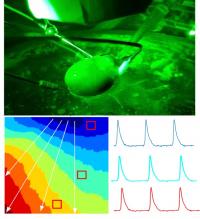