The Global Precipitation Measurement mission or GPM core satellite has been providing rainfall rates and cloud heights in tropical cyclones, and recently found towering thunderstorms that indicated strengthening in Tropical Storm Jose. Those "hot towers" were an indication the storm was strengthening and it later became a hurricane.

The GPM core observatory satellite passed above the intensifying tropical cyclone on Sept. 6, 2017 at 12:45 a.m. AST/EDT (0435 UTC). GPM is a joint mission between NASA and the Japan Aerospace Exploration Agency, JAXA.

Data collected by GPM's Microwave Imager (GMI) at that time showed that weak bands of rain were starting to develop around Jose's center of circulation. GPM's Dual-Frequency Precipitation Radar (DPR) data swath revealed the location of heavy rain in a feeder band on Jose's western side. DPR found that rain in this area was falling at a rate of over 5.3 inches (134 mm) per hour.

?GPM's radar data (DPR Ku band) were used to develop a 3-D cross section at NASA's Goddard Space Flight Center in Greenbelt, Maryland. That 3-D imagery showed the structure of precipitation in the most powerful storms on the western side of the storm where a few "hot towers" in this feeder band were reaching to heights of almost 9.9 miles (16 km).

A "hot tower" is a tall cumulonimbus cloud near the center of a tropical cyclone, often seen prior to intensification. The cloud tops reach at least to the top of the troposphere, the lowest layer of the atmosphere which is approximately 9 miles/14.5 km high in the tropics. These towers are called "hot" because they rise to such altitude due to the large amount of latent heat. Water vapor releases this latent heat as it condenses into liquid. Those towering thunderstorms have the potential for heavy rain.

Twelve hours later, by 5 a.m. AST/EDT (0900 UTC), the center of Hurricane Jose was located near 14.8 degrees north latitude and 49.1 degrees west longitude. That's about 815 miles (1,310 km east of the Lesser Antilles. Jose was moving toward the west-northwest near 18 mph (30 kph), and this general motion is expected to continue during the next couple of days. Maximum sustained winds have increased to near 90 mph (150 kph) with higher gusts. Some strengthening is forecast during the next 48 hours. The estimated minimum central pressure is 986 millibars.

Forecaster Roberts of the National Hurricane Center (NHC) noted that further strengthening is forecast during the next 36 hours. After that time, increasing northerly shear associated with the outflow of Hurricane Irma should inhibit further intensification and subsequently, cause the cyclone to begin weakening.

NHC stated that Interests in the Leeward Islands should monitor the progress of Jose. Hurricane and Tropical Storm Watches will likely be required for portions of these islands later this morning. 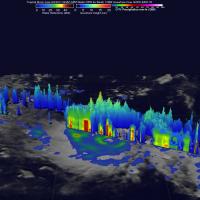