As we age, tiny blood vessels in the brain stiffen and sometimes rupture, causing "microbleeds." This damage has been associated with neurodegenerative diseases and cognitive decline, but whether the brain can naturally repair itself beyond growing new blood-vessel tissue has been unknown. A zebrafish study published on May 3 in Immunity describes for the first time how white blood cells called macrophages can grab the broken ends of a blood vessel and stick them back together.

"Microbleeding occurs very often in the human brain, particularly in elderly people," says Lingfei Luo, a developmental geneticist at Southwest University in China. "We believe that this macrophage behavior is the major cellular mechanism to repair ruptures of blood vessels and avoid microbleeding in the brain."

To simulate a human brain microbleed, Luo and his colleagues shot lasers into the brains of live zebrafish to rupture small blood vessels, creating a clean split in the tissue with two broken ends. Then, the researchers used a specialized microscope to watch what happened next.

The repair process started about a half hour after the laser injury. A macrophage showed up at the damaged blood vessel site and extended two "arms" from its body toward the ends of the broken blood vessel, producing a variety of adhesion molecules to attach itself. Then, it pulled the two broken ends together to mediate their repair. The researchers suspect that adhesion molecules produced by the blood-vessel tissue also play a role in reattachment. Once they were adhered, the macrophage left the scene. The whole process took about three hours.

"At the beginning, we weren't sure this was a repairing behavior," says Chi Liu, a PhD student at Southwest University. "After we confirmed that the macrophage mediates this repair through direct physical adhesion and generation of mechanical traction forces, we were excited. This is a previously unexpected role of macrophages."

A similar repair process also occurred outside the brain. When the researchers ruptured a blood vessel in the zebrafish fin using a laser, a macrophage arrived at the injury site and extended its protrusions to pull the broken blood vessel back together.

The researchers did observe a few quirks in the process. When they used a laser strike to destroy the first macrophage that arrived at a laser-wound site in the brain, no other macrophages came to help repair the breakage (but another macrophage arrived to eat the dead one). Rarely, two macrophages would arrive at the injury on their own, each grab a broken end of the blood vessel, and then simply disengage without fixing the damage.

Macrophages aren't the brain's only repair mechanism for small broken blood vessels, though they look to be the fastest and most efficient. When the researchers watched blood-vessel repair in zebrafish that lacked macrophages, they saw the broken ends of the blood vessel slowly extending on their own to connect over a period of six hours.

"Several aspects of vascular development and remodeling, associated with macrophages, are conserved in human and zebrafish," notes Luo. "Microglia [a subset of macrophage cells] are required for the repair of blood-brain barrier injury in mice, and macrophages can be found surrounding most capillary microbleeds in humans. We believe that the macrophage repair system in our study is very much likely replicated in humans and mice." 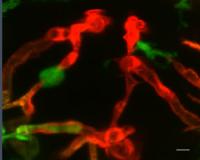