A new method of bioprinting uses aspiration of tiny biologics such as spheroids, cells and tissue strands, to precisely place them in 3D patterns either on scaffolding or without to create artificial tissues with natural properties, according to Penn State researchers.

"Tissue spheroids have been increasingly used as building blocks for fabrication of tissues, but their precise bioprinting has been a major limitation," said Ibrahim T. Ozbolat, Hartz Family Career Development Associate Professor of Engineering Science and Mechanics. "In addition, these spheroids have been primarily bioprinted in a scaffold-free manner and could not be applied for fabrication with a scaffold."

Using scaffolding is necessary for many applications in regenerative medicine and tissue engineering and also in fabrication of microphysiological systems for disease modeling or drug screening.

Ozbolat and his team used aspiration-assisted bioprinting along with conventional micro-valve printing to create homogeneous tissues and tissues containing a variety of cells.

Aspiration-assisted bioprinting uses the power of suction to move tiny microscopic spheroids. Just as one could pick up a pea by placing a drinking straw on it and sucking through the straw, aspiration-assisted bioprinting picks up the tissue spheroid, holds the suction on the spheroid until it is placed in exactly the proper location and then releases it. The researchers report on their tissue engineering work today in Science Advances.

"Of course, we have to gently aspirate the spheroids according to their viscoelastic properties so no damage occurs in transferring the spheroids to the gel substrate," said Ozbolat. "The spheroids need to be structurally intact and biologically viable."

By controlling the exact placement and type of spheroid, the researchers have been able to create samples of heterocellular tissues, those containing different types of cells.

"We demonstrated for the first time that by controlling the location and distance between spheroids we can mediate collective capillary sprouting," said Ozbolat.

The researchers were able to create a matrix of spheroids with capillary sprouting in the desired directions. Capillaries are necessary for creation of tissues that can grow and continue to live. They are a means of delivering oxygen and nutrients to the cells, without which, cells will die. Without capillaries, only the outermost cells will receive oxygen and nutrients.

Precise placement of spheroids also allows creation of heterocellular tissues like bone. By beginning with human mesenchymal stem cells, the researchers found that the cells differentiated and self assembled bone tissue.

The ability to produce artificial living tissues is valuable in areas outside of regenerative medicine. Frequently, tissue samples are necessary to test drugs or screen other chemical products. Producing specific tissues for each purpose could help in these endeavors.

The researchers suggest that this method can be cost effective because the equipment required costs under $1,000 and is easy to use. They report that the system "can be useful in a wide variety of applications, including but not limited to organ-on-a-chip devices, drug testing devices, microfluidic, in vitro human disease models, organoid engineering, biofabrication and tissue engineering, biocomputing and biophysics."

They do note that the system still needs improvement to print spheroids in high-throughput to create larger tissues in a shorter time.

There may also be other, out-of-the-box uses for this system. Ozbolat suggests that bioprinting of electric eel electrocytes that produce an electric current might lead to living batteries in the future.

Machine sucks up tiny tissue spheroids and prints them precisely 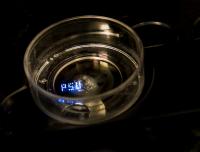