Larvae of the cotton bollworm (Helicoverpa armigera) are dreaded pests all over the world. They have a very wide host range: About 200 different plant species are known as potential food for the voracious insect. The herbivore attacks crops in Africa, South Europe, India, Central Asia, New Zealand, and Australia. Nearly 30% of all globally used insecticides − Bt toxins as well as pyrethroids − are applied to protect cotton and other crops against the bollworm.

Pyrethroids are synthetic substances based on compounds of the natural insecticide pyrethrum in Tansy flowers (Tanacetum). They have been successfully applied in fruit, vegetable and crop farming for decades. In cotton bollworms, development of resistance to the particularly effective pyrethroid fenvalerate was observed in Australia since 1983. In 1998, David Heckel, who became director at the Max Planck Institute for Chemical Ecology in 2004, mapped the location of the resistance gene in the genome of the insect for the first time. This gene locus was later found to encode a P450 monooxygenase enzyme. These so-called cytochrome P450 (CYP) enzymes are also known in human medicine, because they can render toxins or pharmaceuticals ineffective by metabolizing the active molecule.

Nicole Joußen, scientist at the institute and expert on P450 enzymes, studied the Helicoverpa armigera strain "TWB" resistant to fenvalerate. She could identify the P450 monooxygenase in this strain, suspected to mediate pyrethroid resistance. After cloning larger genome regions, DNA sequencing, and performing crossing experiments as well as biochemical analyses, she was surprised to find that of the seven P450 enzymes only one, CYP337B3, hydroxylates the fenvalerate molecule to 4'-hydroxyfenvalerate. This chemical reaction increases the resistance to this toxin 42-fold: A LD50 value of 1.9 µg of fenvalerate was measured in resistant TWB larvae, whereas half of the non-resistant caterpillars died after intake of only 0.04 µg of the toxin.

Unequal Crossing-Over led to the formation of the CYP337B3 Gene

The CYP337B3 gene was formed in a very special way: by a process called "unequal crossing-over" by geneticists. If very similar DNA sequences, for example transposable elements, get in contact with one another during the division of cell nuclei, novel gene combinations occur. As a consequence, some of the genetic information is lost on one DNA strand, and new genetic information is inserted and sometimes even doubled on the other strand. This natural process is important for the evolution of gene families, as could now be observed in the case of the CYP337B3 gene. "For the first time, our results reveal a mutation mediating resistance to an insecticide, which is caused by a crossing-over event," says David Heckel. The scientists studied CYP337B3 and found that the gene consists of parts of two other P450 genes, B1 and B2, encoding enzymes neither of which can detoxify fenvalerate. The unique combination of parts of the B1 and B2 precursor genes in the chimeric B3 gene is responsible for the new capability of the P450 enzyme to bind, hydroxylate, and finally detoxify the insecticide.

Once the CYP337B3 gene was formed, spraying cotton bollworms with pyrethroids caused its frequency in the population to gradually increase. This resistance was successfully delayed in Australia by restricting the use of pyrethroids to once per year, and using other insecticides at other times. This contrasts with the situation in other cotton-growing countries, where pyrethroids were overused, resistance rapidly developed, and then pyrethroids became ineffective against the bollworm. [AO/JWK] 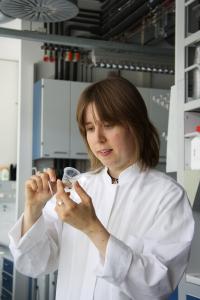