Asgard archaea, proposed as a new archaeal superphylum, are currently composed of five phyla Lokiarchaeota, Thorarchaeota, Odinarchaeota, Heimdallarchaeota, and Helarchaeota. Since Asgard archaea contain abundant eukaryotic signature proteins and form a monophyletic group with eukaryotes in a phylogenetic tree, they are regarded as the closest relatives of Eukarya and have therefore attracted increasing research interests, although the debate about the evolutionary relationship is ongoing. In the past several years, metagenome-assembled genomes (MAGs) enabled us to decipher the metabolic capabilities of Asgard archaea, and the most recent isolation and transcriptomic analysis of Lokiarchaeota provided further insights into their metabolic capabilities. However, since no comprehensive information about the in situ activity of these Asgard archaea has been compiled so far, our understanding of these phylogenetically and evolutionally important archaea is based on prediction, and thus, severely limited.

In the present study, Cai and his colleagues sampled coastal sediments from different depth layers, where they identified abundant Lokiarchaeotal and Thorarchaeotal 16S rRNA genes, for deep metagenomic and metatranscriptomic sequencing (totally 2.3 Tbp). Finally, they recovered 15 Asgard archaeal MAGs with genome completeness >75%, covering almost all phyla (except Odinarchaeota). Notably, the Heimdallarchaeota lineage is composed of three robust subclades including two previously known branches i.e. Heimdall-MHVG and Heimdall-AAG, with high branch support values. Phylogenetic analysis of a 16S rRNA gene (1152 bp) found in the remaining Heimdallarchaeota-like MAGs showed that it formed a new monophyletic branch with an identity below 74% to 16S rRNA genes of other Asgard archaeal phyla. Thus, they propose this lineage as a new phylum named Gerdarchaeota, after Gerd, the Norse goddess of fertile soil, because these Asgard archaea genomes were obtained from organic-rich coastal environments. Genomic analyses predict that Gerdarchaeota are facultative anaerobes in utilizing both organic and inorganic carbon. Nevertheless, unlike their closest relatives Heimdallarchaeota, Gerdarchaeota have genes encoding for cellulase and enzymes involved in the tetrahydromethanopterin-based Wood-Ljungdahl pathway. Another interesting they found is that Gerdarchaeota MAGs lack the key enzyme G1PDH for archaeal lipid biosynthesis, but contain the bacterial/eukaryal-type G3PDH for synthesis of bona fide bacterial lipids, which might explain the eukaryogenesis.

Since diverse Asgard MAGs (6 phyla) were identified in different sedimental depth layers, Cai and his colleagues further investigated their in situ activities through metatranscriptomics to predict their ecological roles. They detected high expression levels of genes encoding extracellular peptidases, ABC transporter, and the enzyme sets for the conversion of amino acids to acetyl-CoA in both surface and subsurface coastal sediments, implying that Asgard archaea might be essential participants in the degradation of these substrates. Also, the presence of transcripts for ethanol metabolism (alcohol dehydrogenase, aldehyde ferredoxin oxidoreductase), suggesting that ethanol might be another substrate or product. It is intriguing to note that they also identified the expressed gene set for aerobic respiration in Gerdarchaeota, Heimdallarchaeota-AAG and Heimdallarchaeota-MHVG, including the key transcript of cytochrome c oxidase (belonging to Gerdarchaeota) indicates that these Asgard archaea might participate aerobically in organic matter degradation in surface sediments. Although the Asgard archaea phyla co-inhabit the same sediment layers, distinct ecological roles are played by a given phylum. For example, unlike Heimdallarchaeota-AAG and Heimdallarchaeota-MHVG, Gerdarchaeota contain and expressed genes for autotrophy and cellulose degradation.

Overall, this study broadens the diversity of the mysterious Asgard archaea and provides evidence for their ecological roles in coastal sediments. 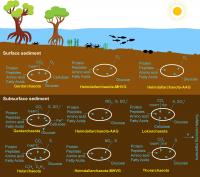