Streams of granular particles bouncing off a target in a simple tabletop experiment produce liquid-like behavior also witnessed in a massive research apparatus that simulates the birth of the universe. A team led by the University of Chicago's Sidney Nagel and Heinrich Jaeger report this surprising finding in the Oct. 27-Nov. 2 issue of Physical Review Letters.

Scientists have attained a good understanding of equilibrium phenomena, which are governed primarily by temperature or pressure. But what about phenomena that have been pushed far beyond their equilibrium states, like a jet of sand" What about quark-gluon plasma, the mixture of subatomic particles that existed for perhaps a few millionths of a second after the big bang"

"We really don't know what the right concepts are to describe this," Nagel said. "We love the physics of granular material because it allows us entrée into this question in relatively simple experiments."

In designing their tabletop experiment, the Chicago team addressed a fundamental question about equilibrium: Under what conditions does a collection of molecules, sand grains or other particles behave like a liquid" Macroscopic and subatomic particles sometimes behave in similar ways. The particles in the Chicago experiment are large enough to allow scientists to track under precisely controlled conditions, an option not available on the subatomic scale.

A paper published in 1883 that described the water-bell phenomenon inspired the granular-stream experiment. The paper reports how a stream of water hitting a narrow, flat, circular target becomes transformed into the thin, hollow shape of a bell. Would a stream of granular materials do likewise"

Cheng, the Chicago graduate student, performed an experiment to find out. He blasted globs of glass and copper beads through a tube into a flat target. "The answer is you can in fact see those bells," said Jaeger, a Professor in Physics. "Specifically, we find that the rapid collisions of densely packed particles produce the liquid state that we can then observe afterward, when everything flies apart and produces these beautiful envelope structures."

Scientists have seen similar structures in the quark-gluon plasma experiments conducted at Brookhaven National Laboratory with the Relativistic Heavy Ion Collider. The $500 million RHIC smashes gold atoms into each other at nearly the speed of light. The tabletop Chicago experiment launches jets of granular materials into a flat target at no more than 12 miles an hour.

"There couldn't be anything farther apart than our experiments and those at RHIC," Nagel said. For that very reason, the Chicago team conducted their test under a variety of conditions to ensure that interactions between the granular particles and the air did not affect the experimental result. "The key ingredient is the high density of rapid collisions," Jaeger said.

The similarity between the granular-jet and RHIC experiments are surprising because scientists would expect quantum physics to dominate the results of the latter. Quantum physics typically rules the atomic and subatomic world. Classical physics, meanwhile, applies to the much larger objects of everyday life.

"That's the amazing thing about physics. The laws you have at one level really are the same as at other levels, or at least influence what happens at other levels. Certain principles are just invariant. Conservation of energy and momentum-you can't get away from these things on any scale." 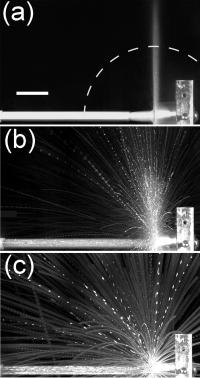