In isolated environments, astronauts, flight crews, offshore workers and military forces must maintain vigilance and work together to ensure a safe and successful mission.

"The NEEMO undersea mission is a similar experience in key ways to what future space travelers might encounter," said Dr. David Dinges, team leader of NSBRI's Neurobehavioral and Psychosocial Factors Team and principal investigator on the project. "Crew members live and work together in a small space, isolated from the outside world, and must effectively perform difficult tasks at a high level of alertness, both as individuals and a team."

Physician astronaut, Dr. Dave Williams of Canada, led the NEEMO undersea excursion in Aquarius off the Florida coast. Aquarius, the only underwater laboratory in the world, is owned and funded by the National Oceanic and Atmospheric Administration and operated by the University of North Carolina at Wilmington. Two additional astronauts, Nicole Stott and Ron Garan, and Dr. Tim Broderick, a physician at the University of Cincinnati, rounded out the crew. Jim Buckley and Ross Hein of UNCW provided undersea engineering support.

The NSBRI study used surveys, physiologic sensors, video analysis, cognitive tests, journaling and the testing of new technologies designed for isolated conditions. One such technology involved computer recognition of participants' facial expressions, recorded on video during telemedicine activities, to inconspicuously detect levels of psychological distress. Refining behavior-monitoring technologies so that astronauts and aquanauts barely notice them is a goal of the project.

"Each experiment is minimally demanding and quick, requiring only a few minutes on most days," Dinges said.

While the NEEMO 9 crew members practiced remote surgical techniques, worked with medical robotics and prepared for extra-vehicular activities (EVA), their interaction with each other and with NEEMO's Mission Control was filmed and recorded. "We're interested in seeing how they reacted to challenges, made decisions and solved problems, but the most valuable element was capturing lessons learned from every task," said Dinges, Director of the Unit for Experimental Psychiatry at the University of Pennsylvania School of Medicine and Professor of Psychology.

Participants recorded thoughts and experiences in daily journals, highlighting what they wanted future astronauts and aquanauts to know about the technologies and protocols being tested.

"Even with extensive planning, little glitches occur with devices used in an underwater space. Part of our project asked crew members to communicate how well the procedures and technologies worked in this kind of environment," Dinges said. "What did the aquanauts think of them? How were they using the equipment? What were their reactions to wearing certain technologies and responding to others? Were they easy to use and helpful? Their feedback is important data."

To assess physiologic reactions to the isolated environment, crew members provided saliva samples for analysis of cortisol and stress levels and wore a sensor vest to record how their body was reacting physiologically to the experience. Another component addressed sleep and circadian rhythm disruption. Participants wore a watch-like device that recorded sleep/wake activity patterns and light exposure. A fourth component involved performing a battery of cognitive tests before and after scheduled tasks and EVAs. Data collected from each of the study's components will be analyzed by NSBRI researchers post-mission.

The project aims to refine real-time behavior monitoring and develop models that predict how crews might perform under remote conditions. "Ultimately, the measurements in this project will provide much needed feasibility information on how effectively we can measure individual and group behavior and performance in extreme environments. From there, we can develop technology that will help maintain an astronaut's ability to perform in space," Dinges said.

NSBRI, funded by NASA, is a consortium of institutions studying the health risks related to long-duration space flight. The Institute's research and education projects take place at more than 70 institutions across the United States.

In undersea habitat, aquanauts learn about teamwork and task performance for the moon and Mars 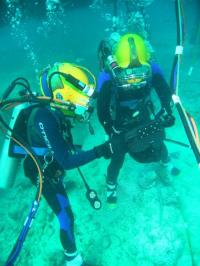