Researchers have found that the water supply of the Colorado River basin, one of the most important sources for water in the southwestern United States, is influenced more by wet-dry periods than by human use, which has been fairly stable during the past few decades.

The study, led by The University of Texas at Austin, took the most comprehensive look to date at the state of a water source that serves 40 million people in seven states. The researchers used 30 years of local water monitoring records and more than a decade of data collected from the NASA satellite system GRACE to reconstruct changes in the basin's water storage since the 1980s.

Scientists from the U.S. Geological Survey, NOAA, UT Center for Space Research, the Arizona Department of Water Resources and Tsinghua University were part of the team. The findings were published online in Water Resources Research Journal on Dec. 10.

The team found that water storage decreased by 50 to 100 cubic kilometers (enough water to fill Lake Mead as much as three times) during droughts that occur about every decade. The big difference between recent and previous droughts is that there have been few wet years since 2000 to replenish the water. In contrast, multiple wet years followed drought years in the 1980s and 1990s.

Researchers also found that total water storage changes are controlled mostly by surface reservoir and soil moisture changes in the upper basin, with additional reductions in groundwater storage in the lower basin that mostly reflect natural responses to wet and dry climate cycles and irrigation pumping in areas without access to Colorado River water.

"This study explains how the system works, what's important and what to look out for," said lead author Bridget Scanlon, a senior research scientist at the Bureau of Economic Geology. "The upper basin is critical. Eighty percent of the runoff in the basin comes from the upper basin, so the climate of the upper basin is really important."

The bureau is a research unit of The University of Texas at Austin's Jackson School of Geosciences.

Water is stored in the Colorado River Basin as snow, soil moisture, reservoir water and groundwater. The on-the-ground measurement data helped the researchers understand where and how water was stored, and the GRACE satellite data gave insight into the total water storage in the basin.

Launched in 2002, the GRACE satellite measures changes in total water storage in an area by monitoring fluctuations in the Earth's gravity field, a value that is influenced by the presence of water.

"GRACE gives us a holistic view on a large scale about variations in total water storage including snow, reservoir, soil moisture and groundwater storage," said Scanlon. "We need to use those data along with as much ground-based data as we can access to understand where the storage changes are occurring in the system."

William Alley, director of science and technology at the National Ground Water Association, said the study is an important example of supplementing GRACE data with on-the-ground research.

"Overall, this paper makes a much needed contribution by demonstrating the importance of supporting GRACE data with a thorough hydrologic analysis," Alley said. "The authors pull together an impressive array of hydrologic data in conjunction with GRACE data to examine natural and anthropogenic influences on water storage in the basin and its basic components."

Scanlon said that this research underscores the importance of saving water in rainy years for the droughts that historically have followed. Whereas most water was stored in surface reservoirs in the past, primarily lakes Mead and Powell, Arizona has been storing much of its allocation of Colorado River water in underground aquifers since the Central Arizona Project aqueducts were completed in the early 1990s. Scanlon said the research should encourage more storage projects.

"We need to manage this variability of supply," she said. "And we do it by storing water in surface and subsurface reservoirs."

Nature, not humans, has greater influence on water in the Colorado River Basin 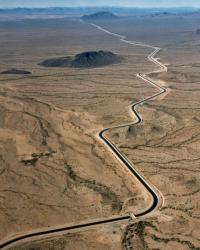 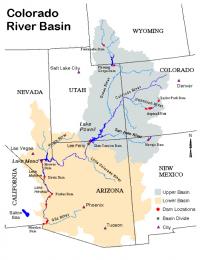