SAN FRANCISCO (July 26, 2016) - Scientists have uncovered a fascinating new clue in the global mystery surrounding wild birds with grossly deformed beaks. A team of researchers from the California Academy of Sciences, University of California San Francisco (UCSF), and the U.S. Geological Survey (USGS) have identified a novel virus that has been linked to Avian Keratin Disorder (AKD), a disease responsible for debilitating beak overgrowth and whose cause has remained elusive despite more than a decade of research. This new virus--identified from Alaska and the Pacific Northwest--is being investigated as a potential cause of AKD and represents a critical step in understanding the emergence of this disease in wild bird populations around the world. The results are published today in the journal mBio.

"Take one look at a bird suffering from Avian Keratin Disorder, and you'll understand the importance of stopping its spread," says Jack Dumbacher, co-author and Academy curator of ornithology and mammalogy. "Birds must be able to feed themselves and preen their plumage by carefully spreading waterproofing oils on their feathers. When deformed beaks restrict them from these life-giving activities, birds become cold, hungry, and often die. We're trying to understand the causes, origins, and distribution of this disorder."

What is Avian Keratin Disorder?

Avian Keratin Disorder is characterized by dramatic beak deformities such as elongation, crossing, or curvature, and disables infected birds by severely impairing basic behaviors--including feeding and preening--that are crucial to their survival. First documented among a population of black-capped chickadees in south-central Alaska during the 1990s, AKD has seemingly spread into Canada and the Pacific Northwest, and similar deformities have also been reported in several species throughout the lower forty-eight states. The disease's hallmark traits have recently been observed in regions as far-flung as Europe and Asia. Aside from chickadees, the other species most commonly affected are nuthatches, woodpeckers, crows, jays, and other members of the crow family.

"These beak deformities can severely handicap the affected birds, which suffer higher rates of mortality and raise fewer young than unaffected individuals," says Colleen Handel, a co-author and scientist with the USGS who first discovered AKD in Alaska and began to document its distribution.

Previous AKD investigations ruled out a number of other possible causes including bacterial or fungal infections, many known avian diseases, human food sources, environmental contaminants, behavioral changes, or trauma that can affect how the beak looks and functions. When the team used new genetic techniques to screen for pathogens in samples from Alaska, they discovered a new virus previously unknown to science.

"This new virus is the strongest lead we've had so far as to a likely cause of the unusual cluster of beak deformities," says Caroline Van Hemert, a co-author and scientist with the USGS. "Although we don't know yet whether this novel virus is the culprit, it's an exciting avenue for future research."

Cutting-edge genetic testing allowed the interdisciplinary team of researchers to track down a cryptic virus hiding in bird DNA extracts. In the past, collaborations between the Academy and UCSF used identical techniques to identify an important new virus that causes Inclusion Body Disease in boas and pythons--a discovery that has since led to insights in the evolution of serious human diseases like Ebola. In the AKD-focused study published today, the team took tissue samples from both sick and healthy birds and applied advanced sequencing technology to pull out genetic information from microbes living in these birds.

Part of the sequencing process involved sifting through hundreds of thousands of DNA fragments, and comparing them to known virus groups (including those commonplace among birds), and then isolating those that appeared to be a match or near-miss. From the pile of fragments of potential viruses sprang a new suspect belonging to the picornavirus family--a large and diverse group that includes well-known human offenders like polio, hepatitis A, and the common cold. The team aptly named their discovery Poecivirus after the genus of black-capped chickadee (Poecile atricapillus) from which the sequences originated, and in which AKD was first documented.

Though more research is necessary to establish Poecivirus definitively as the main cause of AKD, it remains the strongest lead yet. As part of the new virus description, the team generated a detailed map of Poecivirus' genetic material--a tool that will enable scientists all over the world to aid in its identification among birds exhibiting clinical signs of AKD.

"We don't know if Poecivirus is causing this pathology, but we do know that this virus is not limited to chickadees," says Maxine Zylberberg, UCSF researcher and lead author of the study. "We detected Poecivirus in red-breasted nuthatches and northwestern crows with beak deformities, as well as in every chickadee with AKD that we have tested. More work is needed to determine if Poecivirus is causing AKD, but the evidence suggests that it is a strong candidate."

And the possibilities, Dumbacher reminds us, are truly endless. More than 90% of all known viruses have been described from humans and domesticated species, but that combined category represents less than 1% of all viral species on Earth. "Chances are we know very little about the diversity of viruses out there," he says. "When we discuss the new Poecivirus, we aren't even looking at the tip of the iceberg: we're looking at a hair on the top of the tip of the iceberg."

Given the discovery of a potential link between AKD in Alaska and infection by Poecivirus, the research team is keeping an eye on the future. Next steps include investigating how AKD is transmitted, determining whether it's definitively caused by Poecivirus, and understanding the mechanism by which the disease stimulates abnormal beak growth.

In the meantime, the public remains an important player in tracking the occurrences of AKD. "Birders documenting wildlife with cameras can make a difference," says Dumbacher. "We have the potential to leverage bird photography as birders observe potential cases of AKD in the wild. This type of evidence helps experts determine where and how many birds of different species are potentially affected."

If you encounter a bird in the wild with a particularly curved, crossed, or elongated beak, you can help by submitting an observation report with the species type, behavior, the time and location of your sighting, and any accompanying photographs. "The power of citizen science can help us identify other clusters of AKD around the world," says Handel, "where genetic testing can then tell us if this new virus is the common, underlying factor."

"Identifying and sequencing this new virus has really added to our scientific tool belt," adds Dumbacher. "Now it's time to look to nature, and start searching broadly for other instances of Poecivirus around the globe." 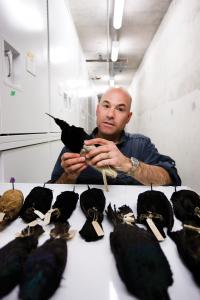 Jack Dumbacher at the California Academy of Sciences in San Francisco, Calif.