Washington, DC-- New work from a team including Carnegie's Hanika Rizo and Richard Carlson, as well as Richard Walker from the University of Maryland, has found material in rock formations that dates back to shortly after Earth formed. The discovery will help scientists understand the processes that shaped our planet's formative period and its internal dynamics over the last 4.5 billion years. It is published by Science.

Earth formed from the accretion of matter surrounding the young Sun. The heat of its formation caused extensive melting of the planet, leading Earth to separate into two layers when the denser iron metal sank inward toward the center, creating the core and leaving the silicate-rich mantle floating above.

Over the subsequent 4.5 billion years of Earth's evolution, convection in Earth's interior, like water boiling on a stove, caused deep portions of the mantle to rise upwards, melt, and then separate once again by density. The melts, since they were less dense than the unmelted rock, rose to form Earth's crust, while the denser residues of the melting sank back downward, altering the mantle's chemical composition in the process.

The mantle residues of crust formation were previously believed to have mixed back into the mantle so thoroughly that evidence of the planet's oldest geochemical events, such as core formation, was lost completely.

However, the research team--which also included Sujoy Mukhopadhyay and Vicky Manthos of University of California Davis, Don Francis of McGill University, and Matthew Jackson, a Carnegie alumnus now at University of California Santa Barbara--was able find a geochemical signature of material left over from the early melting events that accompanied Earth's formation. They found it in relatively young rocks both from Baffin Island, off the coast of northern Canada, and from the Ontong-Java Plateau in the Pacific Ocean, north of the Solomon Islands.

These rock formations are called flood basalts because they were created by massive eruptions of lava. The solidified lava itself is only between 60 and 120 million years old, depending on its location. But the team discovered that the molten material from inside the Earth that long ago erupted to create these plains of basaltic rock owes its chemical composition to events that occurred over 4.5 billion years in the past.

Here's how they figured it out:

They measured variations in these rocks of the abundance of an isotope of tungsten--the same element used to make filaments of incandescent light bulbs. Isotopes are versions of an element in which the number of neutrons in each atom differs from the number of protons. (Each element contains a unique number of protons.) These differing neutron numbers mean that each isotope has a slightly different mass.

Why tungsten? Tungsten contains one isotope of mass 182 that is created when an isotope of the element hafnium undergoes radioactive decay, meaning its elemental composition changes as it gives off radiation. The time it takes for half of any quantity of hafnium-182 to decay into tungsten-182 is 9 million years. This may sound like a very long time, but is quite rapid when it comes to planetary formation timescales. Rocky planets like Earth or Mars took about 100 million years to form.

The team determined that the basalts from Baffin Island, formed by a 60-million-year-old eruption from the mantle hot-spot currently located beneath Iceland, and the Ontong-Java Plateau, which was formed by an enormous volcanic event about 120 million years ago, contain slightly more tungsten-182 than other young volcanic rocks.

Because all the hafnium-182 decayed to tungsten-182 during the first 50 million years of Solar System history, these findings indicate that the mantle material that melted to form the flood basalt rocks that the team studied originally had more hafnium than the rest of the mantle. The likely explanation for this is that the portion of Earth's mantle from which the lava came had experienced a different history of iron separation than other portions of the mantle (since tungsten is normally removed to the core along with the iron.)

It was a surprise to the team that such material still exists in Earth's interior.

"This demonstrates that some remnants of the early Earth's interior, the composition of which was determined by the planet's formation processes, still exist today," explained lead author Rizo, now at Université du Québec à Montréal.

"The survival of this material would not be expected given the degree to which plate tectonics has mixed and homogenized the planet's interior over the past 4.5 billion years, so these findings are a wonderful surprise," added Carlson, Director of Carnegie's Department of Terrestrial Magnetism.

The team's discovery offers new insight into the chemistry and dynamics that shaped our planet's formative processes. Going forward, scientists will have to hunt for other areas showing outsized amounts of tungsten-182 with the hope of illuminating both the earliest portion of Earth's history as well as the place in Earth's interior where this ancient material is stored.

This work was supported by NSF-CSEDI grants. 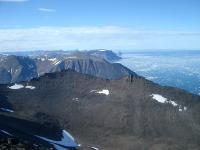