NASA's Aqua satellite captured an infrared image today of tropical cyclones affecting Australia in the western and northern areas of the country. Newly formed Tropical Storm Carlos is bringing heavy rains and gusty winds to Darwin and the Northern Territory, while Tropical Storm Dianne is bringing rains and winds to Western Australia.

NASA's Aqua satellite passed over Australia today, Feb. 16 at 05:17 UTC (12:17 a.m. EST/ 2:47 p.m. Australia/Darwin local time. The Atmospheric Infrared Sounder (AIRS) instrument captured an infrared image of both tropical storms and found each to have strong convection (rapidly rising air that forms the thunderstorms that power a tropical cyclone). Convection was so strong in Carlos and Dianne that the cloud tops of the thunderstorms within were as cold as or colder than -52 Celsius/ -63 Fahrenheit.

Carlos was bringing bands of rainfall to Cape Don, Snake Bay, Cape Fouroroy, and inland over an area that includes Annaburroo, Emerald Springs and Batchelor. For radar from the Australian Bureau of Meteorology, go to: › http://www.bom.gov.au/products/IDR632.loop.shtml.

A Cyclone Warning for Carlos is in effect for coastal areas from Daly River Mouth to Goulburn Island, including Darwin, Croker Island and the Tiwi Islands. A Cyclone Watch continues for coastal areas from Port Keats to Daly River Mouth. The Joint Typhoon Warning Center and Australian Bureau of Meteorology expect Carlos to eventually track southwest over land for the next several days.

A Cyclone Watch is currently in effect for coastal areas of Western Australia from Exmouth to Cape Cuvier. During the morning hours (Eastern Time/U.S.) bands of showers were pushing southeast from Dianne from Pardoo (in the east) through Port Hedland southwest to Exmouth. It is currently drifting to the northeast but is expected to loop and move south then southwest after the next day or two.

The Joint Typhoon Warning Center expects Dianne to continue strengthening under an environment of warm sea surface temperatures and low wind shear for the next three days before running into adverse conditions. During that time, however, it is forecast to reach hurricane force and bring gusty winds and heavy rainfall to Learmonth as its center passes to the west. 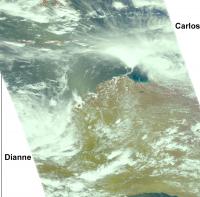