A team of eminent specialists from a variety of academic disciplines has coalesced around a goal of creating new insight into the life and genius of Leonardo da Vinci by means of authoritative new research and modern detective technologies, including DNA science.

The Leonardo Project is in pursuit of several possible physical connections to Leonardo, beaming radar, for example, at an ancient Italian church floor to help corroborate extensive research to pinpoint the likely location of the tomb of his father and other relatives. A collaborating scholar also recently announced the successful tracing of several likely DNA relatives of Leonardo living today in Italy (see endnotes).

If granted the necessary approvals, the Project will compare DNA from Leonardo's relatives past and present with physical remnants -- hair, bones, fingerprints and skin cells -- associated with the Renaissance figure whose life marked the rebirth of Western civilization.

The Project's objectives, motives, methods, and work to date are detailed in a special issue of the journal Human Evolution, published coincident with a meeting of the group hosted in Florence this week under the patronage of Eugenio Giani, President of the Tuscan Regional Council (Consiglio Regionale della Toscana).

Born in Vinci, Italy, Leonardo died in 1519, age 67, and was buried in Amboise, southwest of Paris. His creative imagination foresaw and described innovations hundreds of years before their invention, such as the helicopter and armored tank. His artistic legacy includes the iconic Mona Lisa and The Last Supper.

The idea behind the Project, founded in 2014, has inspired and united anthropologists, art historians, genealogists, microbiologists, and other experts from leading universities and institutes in France, Italy, Spain, Canada and the USA, including specialists from the J. Craig Venter Institute of California, which pioneered the sequencing of the human genome.

The work underway resembles in complexity recent projects such as the successful search for the tomb of historic author Miguel de Cervantes and, in March 2015, the identification of England's King Richard III from remains exhumed from beneath a UK parking lot, fittingly re-interred 500 years after his death.

Like Richard, Leonardo was born in 1452, and was buried in a setting that underwent changes in subsequent years such that the exact location of the grave was lost.

If DNA and other analyses yield a definitive identification, conventional and computerized techniques might reconstruct the face of Leonardo from models of the skull.”

In addition to Leonardo's physical appearance, information potentially revealed from the work includes his ancestry and additional insight into his diet, state of health, personal habits, and places of residence.

Beyond those questions, and the verification of Leonardo's "presumed remains" in the chapel of Saint-Hubert at the Château d'Amboise, the Project aims to develop a genetic profile extensive enough to understand better his abilities and visual acuity, which could provide insights into other individuals with remarkable qualities.

It may also make a lasting contribution to the art world, within which forgery is a multi-billion dollar industry, by advancing a technique for extracting and sequencing DNA from other centuries-old works of art, and associated methods of attribution.

Says Jesse Ausubel, Vice Chairman of the Richard Lounsbery Foundation, sponsor of the Project's meetings in 2015 and 2016: "I think everyone in the group believes that Leonardo, who devoted himself to advancing art and science, who delighted in puzzles, and whose diverse talents and insights continue to enrich society five centuries after his passing, would welcome the initiative of this team -- indeed would likely wish to lead it were he alive today."

In the journal, group members underline the highly conservative, precautionary approach required at every phase of the Project, which they aim to conclude in 2019 to mark the 500th anniversary of Leonardo's death.

For example, one objective is to verify whether fingerprints on Leonardo's paintings, drawings, and notebooks can yield DNA consistent with that extracted from identified remains.

Early last year, Project collaborators from the International Institute for Humankind Studies in Florence opened discussions with the laboratory in that city where Leonardo's Adoration of the Magi has been undergoing restoration for nearly two years, to explore the possibility of analyzing dust from the painting for possible DNA traces. A crucial question is whether traces of DNA remain or whether restoration measures and the passage of time have obliterated all evidence of Leonardo's touch.

In preparation for such analysis, a team from the J. Craig Venter Institute and the University of Florence is examining privately owned paintings believed to be of comparable age to develop and calibrate techniques for DNA extraction and analysis. At this year’s meeting in Florence, the researchers also described a pioneering effort to analyze the microbiome of a painting thought to be about five centuries old.

If human DNA can one day be obtained from Leonardo's work and sequenced, the genetic material could then be compared with genetic information from skeletal or other remains that may be exhumed in the future.

Organizations participating in the Leonardo Project include:

Says Eugenio Giani, President of the Regional Council of Tuscany: "The fact that a team of eminent scholars from different academic disciplines and parts of the world has united with the common objective of furthering investigation into one of the greatest geniuses is positive and very important."

"As President of the Tuscan Regional Council, I am pleased to host in our headquarters a meeting that shows key aspects our current state of knowledge of Leonardo da Vinci. My hope, as a Florentine and Tuscan, is that all this will help outline a portrait of Leonardo as faithful as possible to reality, bringing out the true bond that he had with Florence, starting from the properties of his family in the city. Scientifically, the chance to create, through new research and technology, a new vision of the life of Leonardo starting from a study of DNA is very important."

Compiled by Project collaborator Claire Stypulkowski, the collection of five journal articles trace the path Leonardo took from his Italian birthplace to his final days serving the King of France. They outline the efforts to date, detailing the history and evidence regarding Leonardo's life and his remains in Amboise, the research and high-tech investigation of his father's tomb in Florence, and the tracing of family descendants.

Says Brunetto Chiarelli of the International Institute for Humankind Studies and editor of Human Evolution: "We are proud to share with the public the details of this exciting endeavor."

And he underlined this message from the Project's introductory paper: “The search for Leonardo’s remains at Amboise Castle, for the remains or traces of his family members in Florence, Vinci, and Milan, and for traces of his DNA in his works is fraught with difficulty.”

"Matching Leonardo's DNA to that of his family presents puzzles that are minutely specific to their history and circumstances, but the tools the investigators use are generic and broadly applicable. We stand to gain not only greater historical knowledge of Leonardo but possibly a reconstruction of his genetic profile, which could provide insights into other individuals with remarkable qualities."

"The last Plantagenet King of England and the author who gave us Don Quixote are two whose places in history are somewhat better documented now through recent anthropological study. Is Leonardo the next?"

The Leonardo Project," a special edition of the journal Human Evolution, is publicly available here: http://bit.ly/1T2bbk1 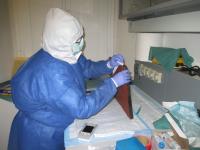 Analyzing the Microbiome of a 5 Century Old Painting 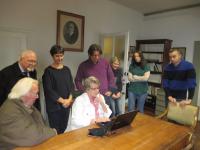