RIVERSIDE, Calif. -- Contrary to popular belief, women played a central role in Maya society before the arrival of Spanish explorers in the early 16th century, a University of California, Riverside graduate student has discovered. That finding is significant for modern Mayan women, whose status in society rapidly diminished under Spanish colonial rule and remains so today, according to Shankari Patel, a Ph.D. candidate in anthropology.

Patel's groundbreaking research, which included extensive fieldwork in Mexico's Yucatan Peninsula and an examination of previously uncatalogued artifacts in the British Museum, has won her the 2011 Dissertation Award from the American Anthropological Association's American Feminist Association (AFA) and the AAA Minority Dissertation Fellowship. Patel expects to complete her dissertation, "Journey to the East: Pilgrimage, Politics, and Gender at Postclassic Yucatan," and graduate in June.

The AFA described her reinterpretation of the archaeology and history of the Maya as "compelling."

Patel, a native of Hawaii who grew up in Echo Park, Calif., said she became interested in the role of Maya women while touring the Yucatan Peninsula.

"Maya culture has been described by scholars as male-dominated. But I found many towns named for women, and female deities on the east coast of the Yucatan Peninsula," she explained. "I started asking how women came to be removed from religious institutions and activities, and from the history of the region."

Patel discovered that thousands of religious and other artifacts of Maya society were removed from the region, beginning with Spanish explorers who arrived in 1512, and later by British sailors. More than 2,000 objects from Isla Sacrificios, a small island off the coast of Vera Cruz that she contends was part of a female deity pilgrimage network in use from about 1100 A.D. to 1500 A.D., were delivered to the British Museum in 1844 and remained in crates. Fewer than a dozen of those items had been published or displayed in the museum. "We excavate so much, but not all of it gets analyzed," she said.

After receiving permission from museum administrators and with research funding from UC MEXUS (University of California Institute for Mexico and the United States), Patel began a methodical examination of mountains of crates in a scene she likened to "Raiders of the Lost Ark." She found hundreds of spindle whorls — ceramic disks typically used for spinning and weaving, but in this case used in religious rituals — as well as female icons and figurines used in funerary rituals.

Artifacts at the British Museum and elsewhere in Europe provide evidence of the central role women played in Maya society before colonialization, Patel said, including priestess oracles along the Yucatan Peninsula's east coast.

"Women lost their status and authority with the advent of colonialism," she said. "The Spaniards didn't understand female leaders and they squashed pagan religions. They branded women healers and diviners as witches. They talked about them as improper women who spoke for their men.

"Our society is so patriarchal, and archaeologists often don't realize how that affects the way they look at the past. What we say about the past is important to the people who live there today. It's political how you talk about people in the past. If you say women are subjugated today because they always have been, that's a way of justifying what's happening today. If you can show that was not true, that it happened because of colonialism, there is opportunity for new interpretations of history and for change to occur."

Thomas C. Patterson, distinguished professor and chair of the UCR Department of Anthropology, said Patel is a skilled archaeologist whose research will contribute to a richer understanding of the position of women in the religious and sociopolitical institutions of Postclassic (900-1500 AD) Maya society.

Her research makes use of ethnohistoric, archaeological, and iconographic information from archaeological sites in eastern Mesoamerica and from Mexican codices, and illustrates linkages between the Mixtec and eastern Maya societies, Patterson said. "It focuses on understanding pilgrimages to oracular shrines that linked the two peoples from the two regions and how these journeys provided elite women with political resources that they wielded in everyday life," he added. "Her investigations will add significant textures to our understanding of Mexican society in late Precolumbian times. The reason for this is her articulation of gender and the participation of women in religious pilgrimages to the oracular shrines of female deities in the region." 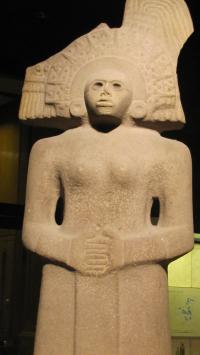