Harnessing the electrical and mechanical properties of the carbon nanotube, a team of researchers has crafted a working radio from a single fiber of that material.

Fixed between two electrodes, the vibrating tube successfully performed the four critical roles of a radio--antenna, tunable filter, amplifier and demodulator--to tune in a radio signal generated in the room and play it back through an attached speaker.

Functional across a bandwidth widely used for commercial radio, the tiny device could have applications far beyond novelty, from radio-controlled devices that could flow in the human bloodstream to highly efficient, miniscule, cell phone devices.

Developed at the National Science Foundation's (NSF) Center of Integrated Nanomechanical Systems, a research team led by Alex Zettl of the University of California at Berkeley announced the findings online on Oct. 31, 2007 (http://pubs.acs.org/journals/nalefd/index.html). The findings are scheduled to be printed in Nano Letters in November.

"This breakthrough is a perfect example of how the unique behavior of matter in the nanoworld enables startling new technologies," says Bruce Kramer, a senior advisor for engineering at NSF and the officer overseeing the center's work. "The key functions of a radio, the quintessential device that heralded the electronic age, have now been radically miniaturized using the mechanical vibration of a single carbon nanotube."

The source content for the first laboratory test of the radio was "Layla," by Derek and the Dominos, followed soon after by "Good Vibrations" by the Beach Boys.

One of the primary goals for the center is to develop minuscule sensors that can communicate wirelessly, says Settle. "A key issue is how to integrate individual molecular-scale components together into a system that maintains the nanometer scale. The nanoradio achieves this by having one molecular structure, the nanotube, simultaneously perform all critical functions," he adds.

The new device works in a manner more similar to the vacuum tubes from the 1930s than the transistors found in modern radios. In the new radio, a single carbon fiber a few hundred nanometers (billionths of a meter) long, and only a few molecules thick, stands glued to a negatively charged base of tungsten that acts as a cathode. Roughly one millionth of a meter directly across from the base lies a positively charged piece of copper that acts as an anode.

Power in the form of streaming electrons travels from an attached battery through the cathode, into the nanotube, and across a vacuum to the anode via a field-emission tunneling process.

"The field emission process could be likened to a runner jumping across a ditch; you only make it across if you have enough speed, i.e. energy, to begin with," says Zettl. "So electrons jump the physical gap from cathode to anode when you supply enough energy to the device from the battery."

The stream of electrons along the nanotube changes when a radio wave encoded with information--simply a wave of photons that travels in a controlled manner--washes across the tube and causes it to resonate. This mechanical action is what amplifies and demodulates, or decodes, the radio signal.

"This coupling of the mechanical waving motion of the nanotube to the success rate of electrons jumping the gap is key to the functioning of the radio," says Zettl. "What emerges from the anode is then the information signal, which can be transferred to additional amplifiers and a speaker to reveal the originally encoded music or any other data."

By permanently lengthening or shortening the nanotube, a modification resulting from sending a short-lived larger-than-normal electrical current through the device, the researchers were able to control the frequency of the radio signal that the device could receive.

The researchers believe it would be easy to produce such nanotube radios for receiving signals in the 40-400 megahertz range, a range within which most FM radio broadcasts fall.

The researchers fine tune the nanoradio to a frequency, akin to a channel, by using the electrostatic field between the cathode and anode to tighten or loosen the nanotube, a process the researchers relate to the tightening or loosening of a string on a guitar. According to Zettl, the sensitivity of the nanotube radio can be enhanced by attaching an external antenna or by using an array of nanotubes that maintain the extremely small size.

While the concept of a miniaturized receiver for picking up broadcast music signals has appeal, the technology has the potential to assist in a range of interesting uses.

Adds Bruce Kramer, "The application of a fully functioning radio receiver less than 50 millionths of an inch in length and one millionth of an inch in diameter potentially allows the radio control of almost anything, from a single receiver in a living cell to a vast array embedded in an airplane wing."

The lead author on the study was graduate student Kenny Jensen from Zettl's research group and he was joined on the paper by postdoctoral researcher Jeff Weldon and graduate student Henry Garcia, also members of the Zettl group at the University of California at Berkeley and the Lawrence Berkeley National Laboratory. In addition to support from NSF, the work also received funding from the Department of Energy. The research was supported through NSF award number EEC-0425914.

Additional information about the nanoradio can be found at: http://socrates.berkeley.edu/~argon/nanoradio/radio.html

World's smallest radio fits in the palm of the hand...of an ant 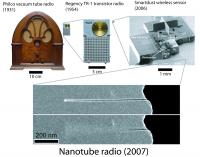 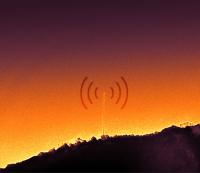