In the world's oceans, billions of tiny marine snails (a form of plankton) commute daily between surface waters, where they feed at night, to depths of several hundred metres during the day to rest while avoiding predators. Marine snails play an important role in geochemical cycles and climate: 12-13% of the global carbonate flux occurs when the calcium carbonate shells of dead snails sink to the depths, where they dissolve and contribute to atmospheric carbon and ocean acidification. But because they are difficult to study and can't be kept in the laboratory, the behavior of these animals - which bear poetic names such as sea butterflies - is poorly known, especially for the subtropical and tropical regions where their diversity is greatest.

Here, a team of oceanographers and engineers who specialize in research at the intersection of fluid physics and biology, film the movements of tropical marine snails and analyze these both from a fluid physics and ecological perspective. They show that each species has a distinct style of swimming and sinking, beautiful to watch, depending on the shape of their shell (coiled, elongated, or round), body size, presence of flapping "wings", and speed. The smallest, slowest species have more difficulty swimming due to seawater being "stickier" and more viscous for them - in technical terms, with a lower "Reynolds number" - which affects the angle, trajectory, and stability of their movement.

"We wanted to answer how the swimming behavior of these beautiful animals is affected by their different shell shapes and sizes. We found that species with a shell shaped like an airplane wing swims faster and is more maneuverable than those with 'snail-like' coiled shells. Understanding the swimming ability of these animals is helping us better understand their ecological importance and distribution in the ocean. Further, as engineers, we hope to learn from the swimming style of these organisms to design a new generation of bio-inspired underwater vehicles," says corresponding author Dr David Murphy, Assistant Professor at the Department of Mechanical Engineering of the University of South Florida, Tampa, Florida.

Between 2017-2019, the researchers caught multiple individuals of nine species of marine snails (0.9-13.1 mm long) at night off Bermuda, including 7 species of thecosomatous pteropods ("sea butterflies"), one species of gymnosomatous pteropods ("sea angels", which lack a shell as adults), and one species of atlantid heteropods. They transported them to the laboratory, where they recorded their behavior in a salt-water aquarium with high-speed stereophotogrammetry, a technique that tracks movement in 3D with a pair of cameras. For each species, they calculated the absolute and normalized speed (relative to body length) during active swimming and passive sinking, the frequency of wing movement, the angle of descent during sinking, the tortuosity of the path of ascent during swimming, and the Reynolds number.

They show that each species has a distinct swimming pattern, generally ascending in a saw-toothed spiral at 12-114 mm/s, or 1-24 body lengths per second - corresponding to an average-sized human male swimming at up to 40 m per second. The snails sink at similar speeds, but in a straight line, at an angle of 4-30° relative to vertical.

"We conclude that the swimming and sinking behavior of these pelagic snails corresponds strongly with shell shape and size. Tiny snails with coiled shells swim more slowly whereas larger snails with bottle-shaped or wing-shaped shells swim faster because their larger sizes allow them to overcome the effects of water viscosity. However, swimming speed does not correlate with how far these animals migrate each day, which suggests that light and temperature levels and the presence of predators and prey also play a role. We also found that the sea butterfly with the wing-shaped shell uses its shell to 'hang-glide' downwards in order to slow its sinking," says Murphy.

To study each species' depth preferences, Murphy et al. further sampled large numbers of snails with a computer-operated net, called a Multiple Opening/Closing Net and Environmental Sensing System, 0-1000 m below the surface. They used machine learning (based on images) and ribosomal DNA barcoding to determine species. Based on these results, the researchers estimate that these species travel 50-300 m per day, in a daily vertical "commute" that takes a total of 1-3.7 h per day.

"It's absolutely mesmerizing to watch these tiny, delicate animals flap their wings in really complex motions in order to essentially fly through the water. We're lucky to have high speed cameras that can slow down this motion enough for us to see it. And it's stunning to think that these sea butterflies are using the same fluid dynamics principles to fly through water that insects use to fly through air," concludes Murphy.

Poetry in motion: Engineers analyze the fluid physics of movement in marine snails 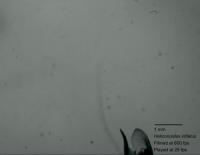