NS3 is an enzyme specific to the hepatitis C virus. If developed, a drug capable of recognizing and selectively attacking it could fight the disease without side effects for the body. However, to be able to develop one we need to know more about the behavior of this important protein in the virus replication process. Some SISSA scientists have provided a detailed and comprehensive view of the behavior of NS3. The study has been published in the journal Nucleic Acids Research.

According to the WHO, a good 140 million people are affected by hepatitis C (3/4 million new cases per year). This is still a subtle disease which, in the event of chronic infection, heavily affects the patients' quality of life and whose complications can lead to death. One of the molecules involved in the reproduction mechanism of the virus in the body is a helicase, NS3, an enzyme that interacts with the RNA (the viral genome, which is not like our DNA) by climbing onto it and helping the pathogen's replication process.

"By knowing in detail how this helicase works, in the future we could try to block the viral replication, and thus stop the disease from proliferating in the body" explains Giovanni Bussi, SISSA professor and among the study authors. NS3 facilitates the work of the polymerases, the molecules that build a replica of the RNA strand, by "opening" and preparing the RNA to the action of the second enzyme. "NS3 crawls along the RNA strand contracting and extending like a caterpillar and, as it does so, it releases the part of the virus to which the polymerase then attaches" explains Andrea Pérez-Villa, SISSA student and first author of the paper. "We decided to analyze this protein because, unlike others, it is only present in the hepatitis C virus. This way, any drug capable of targeting its interaction with the RNA would not damage other proteins, for example, those belonging to the body being attacked by the virus. This means that, theoretically, the drug would have no side effects".

"Our work was based on a computer simulation, starting from the available experimental data", explains Pérez-Villa. So far, crystallography studies succeeded in obtaining a limited number of "images" of NS3, too few to be able to reconstruct the whole process. Based on existing data, Pérez-Villa and Bussi (as well as Maria Darvas, SISSA research scientist who took part in the study) created a model of the protein and had it interact with the viral RNA. But not only that.

"During the process, ATP, the "fuel" utilized by proteins, is consumed. Therefore our simulation also reproduced the system's interaction with ATP and subsequently with ADP, a waste product together with phosphate, after ATP had been utilized" concludes Bussi. So for the first time we provided a detailed description of the process, which will serve as a guide for future steps forward, whether theoretical or experimental. 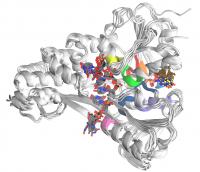