When students enter college, they either have it or they don't. And which side of the digital divide they fall on may well shape their identities and what route they take into careers, suggests a new study.

The research looked at the computer technology knowledge of 500 undergraduate students and how skills they brought from high school impacted their early college coursework. The findings, published online in advance of regular publication in the journal New Media and Society, should be on the radar screens of both high school and university educators, says Joanna Goode, a professor of education studies in the University of Oregon's College of Education. Institutions, she said, "are perpetuating rather than resisting inequalities associated with the digital divide."

"I found that high-school opportunities around technology really shape students' abilities to engage fully in university academic life," Goode said. "If students don't have experiences in high school, they show up for college ill-prepared to have a variety of choices about which directions to go in their scholarship. Strong preparation, either at home or in high school, can really launch students into feeling successful in college. Insufficient preparation really gives students a sense of not belonging and a deficit in their own perspectives as academic beings."

The study, conducted in California with a comprehensive survey and selected follow-up interviews with three students with different technological experiences, captured a snapshot of the digital divide in 2004. While the definition of digital divide may need revision, Goode said, the problems identified in the study likely have gotten worse and need to be addressed.

Wikipedia -- an online knowledge source used by most college students, according to a recent study -- defines the digital divide as "the gap between people with effective access to digital and information technology and those with very limited or no access at all." Today, that definition might well be more about how people's identities -- tied to their understanding and use of computers and software -- create both academic opportunities and obstacles, Goode said. "While the knowledge divide is still important, at a fundamental level, it is now more a case of what is the context of using technology, and why does it matter for each individual?"

Computer technology and Internet access are keys to success in college, but students often had left high school with skills ranging from very little to fully saturated, Goode found. Very few of the students had received formal training geared for academic success in their high schools.

Goode became interested in studying the digital divide as the focus of her doctoral studies after witnessing students' problems with technology as a high-school teacher. "Do we all have to have the same knowledge about computers to be successful?" she asked. "Do scientists and artists have to know how to use the same tools? Well, no. I wanted to look at how this technology impacts peoples' real lives."

These students helped Goode explore what they knew about technology when entering college, and whether their knowledge level was a barrier or a gatekeeper to certain majors.

The picture that emerged from all the data, Goode said, was that in the high schools, "some kids are being trained for using technology for academic purposes or they may be taught for low-level vocational uses that makes them good workers but not necessarily good scholars."

Many students, Goode said, begin college unprepared technologically but have no ready access for remedial workshops or help during orientation. "They are left on their own," she said. If they don't have that knowledge it's one more sense of 'I don't' belong, I'm not prepared. I'm out of here.'"

University campuses, Goode said, have the resources, but even today it is only the technologically savvy students who seek them out. "The students who really need the help get no outreach programs to help them learn about campus technology programs such as workshops, resources and free software," she said.

High schools and colleges, she said, have to start thinking about the digital divide in much more complex ways and provide learning experiences for students to build their identities so they have a chance for being successful in college across majors, so that their destinies aren't already decided based on what experiences they have in high school."

Digital divide changing but not for students torn by it 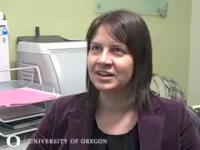