Although Cercopithecus monkeys, a widely distributed genus in Africa, usually have a discerning palate for fruits and leaves, they are opportunistic omnivores that sometimes consume lizards, snakes, birds and mice. These forest-dwelling primates share habitat and food resources with bats, which are known reservoirs for zoonotic diseases such as Ebola, Marburg and Henipa viruses as well as bacteria and parasites that can be spread between animals and humans. This has led researchers to hypothesize that primate consumption of fruits contaminated with an infected bat's saliva or feces facilitates zoonotic disease transmission. Scientists estimate that more than six out of every 10 infectious diseases in humans are spread from animals.

Primates and bats also may interact directly, but their behavioral and predator-prey interactions are poorly documented, and detailed reports of their interactions have been rare, until now. Researchers in the Dorothy F. Schmidt College of Arts and Letters at Florida Atlantic University initiated a study of Cercopithecus predation on bats after observing monkeys preying on two different bat species in Gombe National Park in Tanzania. They are the first to document monkeys consuming bats with photos and video.

"Our study found that Cercopithecus monkeys opportunistically preyed on bats not only in Gombe, but also in the Kakamega Forest in Kenya," said Kate Detwiler, Ph.D., co-author of the study and an assistant professor in FAU's Department of Anthropology. "The behavior that we observed and the persistence of these monkeys to capture their prey indicate that bats are desirable items in their food repertoire."

During the course of the study, the researchers observed the Cercopithecus monkeys both handling and eating bats and sometimes had prolonged contact with the bat carcass. The monkeys spent between 10 minutes to just a little over an hour consuming a single bat, and in one case consuming the bones as well.

"In two of the events at the Kakamega Forest in Kenya, a monkey snatched a bat from its day-roosting tree before eating it," said Elizabeth Tapanes, first author of the study and a recent graduate of the master's in arts program in the Department of Anthropology at FAU. "Roosting bats were likely easy prey that could be reached while torpid or asleep."

All cases of monkeys hunting or feeding on bats occurred in or near human-modified or forest-edge habitats. Both the Gombe and the Kakamega ecosystems have experienced forest fragmentation and loss over recent decades. These habitat changes have led to more primates using forest edges and adjacent-modified habitats like the plantation forests where the predation events in the study occurred.

"While effects of habitat change on bats are unknown and merit further study, our observations suggest that Cercopithecus monkeys preying on bats may be habitat specific, and possibly affected by anthropogenic habitat changes," said Tapanes.

Co-author of the study also includes Marina Cords, Ph.D., a professor in the Department of Ecology, Evolution, and Environmental Biology at Columbia University in New York. 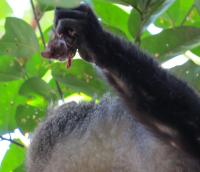