A team of researchers led by scientists from the American Museum of Natural History has released the first report of widespread biofluorescence in the tree of life of fishes, identifying more than 180 species that glow in a wide range of colors and patterns. Published today in PLOS ONE, the research shows that biofluorescence—a phenomenon by which organisms absorb light, transform it, and eject it as a different color—is common and variable among marine fish species, indicating its potential use in communication and mating. The report opens the door for the discovery of new fluorescent proteins that could be used in biomedical research.

"We've long known about biofluorescence underwater in organisms like corals, jellyfish, and even in land animals like butterflies and parrots, but fish biofluorescence has been reported in only a few research publications," said co-lead author John Sparks, a curator in the Museum's Department of Ichthyology. "This paper is the first to look at the wide distribution of biofluorescence across fishes, and it opens up a number of new research areas."

Unlike the full-color environment that humans and other terrestrial animals inhabit, fishes live in a world that is predominantly blue because, with depth, water quickly absorbs the majority of the visible light spectrum. In recent years, the research team has discovered that many fishes absorb the remaining blue light and re-emit it in neon greens, reds, and oranges.

"By designing scientific lighting that mimics the ocean's light along with cameras that can capture the animals' fluorescent light, we can now catch a glimpse of this hidden biofluorescent universe," said co-lead author David Gruber, an associate professor of biology at Baruch College and a research associate at the American Museum of Natural History. "Many shallow reef inhabitants and fish have the capabilities to detect fluorescent light and may be using biofluorescence in similar fashions to how animals use bioluminescence, such as to find mates and to camouflage."

The researchers' investigations into fish biofluorescence began with a serendipitous observation of green eel fluorescence off of Little Cayman Island as Sparks and Gruber were imaging coral biofluorescence for an exhibit for the traveling American Museum of Natural History exhibition Creatures of Light: Nature's Bioluminescence.

To further explore this phenomenon, Sparks, Gruber, and researchers from the John B. Pierce Laboratory of Yale University, the University of Kansas, and the University of Haifa, Israel, along with professional photographers and videographers, embarked on four additional high-tech expeditions to tropical waters off of the Exumas in the Bahamas and the Solomon Islands. During night dives, the team stimulated biofluorescence in the fish with high-intensity blue light arrays housed in watertight cases. The resulting underwater light show is invisible to the human eye. To record this activity, the researchers used custom-built underwater cameras with yellow filters, which block out the blue light, as well as yellow head visors that allow them to see the biofluorescent glow while swimming on the reef.

The most recent expedition was The Explore21 Solomon Islands Expedition, the first trip under a new Museum initiative that supports exploratory fieldwork that is multidisciplinary and heavily integrated with emerging technologies. From the research vessel Alucia the scientists conducted technical scuba dives and descended in a three-person submersible to examine deep coral reef biofluorescence down to 1,000 meters. They also submitted the scientific paper while aboard.

These expeditions revealed a zoo of biofluorescent fishes—from both cartilaginous (e.g. sharks and rays) and bony (e.g. eels and lizardfishes) lineages—especially among cryptically patterned, well-camouflaged species living in coral reefs. By imaging and collecting specimens in the island waters, and conducting supplementary studies at public aquariums after hours, researchers identified more than 180 species of biofluorescent fishes, including species-specific emission patterns among close relatives.

The team also noted that many biofluorescent fishes have yellow filters in their eyes, possibly allowing them to see the otherwise hidden fluorescent displays taking place in the water. Although more research is needed, this finding indicates that biofluorescence could be used for interspecific communication while remaining camouflaged to predators. This ability might be especially important during full moons, when fishes have been shown to partake in mating rituals.

"The cryptically patterned gobies, flatfishes, eels, and scorpionfishes—these are animals that you'd never normally see during a dive," Sparks said. "To our eyes, they blend right into their environment. But to a fish that has a yellow intraocular filter, they must stick out like a sore thumb."

In addition, the research revealed that fish biofluorescence is extremely variable, ranging from simple eye rings to glowing green mucus secreted on the outside of fishes to complex fluorescent patterns throughout the body, including internally, suggesting that the ability to glow evolved a number of times in fishes. Further study on the mechanics of this phenomenon could uncover new florescent proteins for use in experimental biology.

"The discovery of green fluorescent protein in a hydrozoan jellyfish in the 1960s has provided a revolutionary tool for modern biologists, transforming our study of everything from the AIDS virus to the workings of the brain," Gruber said. "This study suggests that fish biofluorescence might be another rich reservoir of new fluorescent proteins."

The Museum greatly acknowledges the Dalio Foundation for its generous support of the inaugural Explore21 expedition. 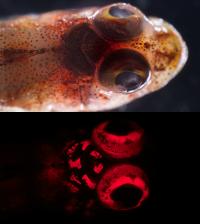