Imagine not a white, but a green Arctic, with woody shrubs as far north as the Canadian coast of the Arctic Ocean. This is what the northernmost region of North America looked like about 125,000 years ago, during the last interglacial period, finds new research from the University of Colorado Boulder.

Researchers analyzed plant DNA more than 100,000 years old retrieved from lake sediment in the Arctic (the oldest DNA in lake sediment analyzed in a publication to date) and found evidence of a shrub native to northern Canadian ecosystems 250 miles (400 km) farther north than its current range.

As the Arctic warms much faster than everywhere else on the planet in response to climate change, the findings, published this week in the Proceedings of the National Academy of Sciences, may not only be a glimpse of the past but a snapshot of our potential future.

"We have this really rare view into a particular warm period in the past that was arguably the most recent time that it was warmer than present in the Arctic. That makes it a really useful analogue for what we might expect in the future," said Sarah Crump, who conducted the work as a PhD student in geological sciences and then a postdoctoral researcher with the Institute of Arctic and Alpine Research (INSTAAR).

To gain this glimpse back in time, the researchers not only analyzed DNA samples, they first had to journey to a remote region of the Arctic by ATV and snowmobile to gather them and bring them back.

Dwarf birch is a key species of the low Arctic tundra, where slightly taller shrubs (reaching a person's knees) can grow in an otherwise cold and inhospitable environment. But dwarf birch doesn't currently survive past the southern part of Baffin Island in the Canadian Arctic. Yet researchers found DNA of this plant in the ancient lake sediment showing it used to grow much farther north.

"It's a pretty significant difference from the distribution of tundra plants today," said Crump, currently a postdoctoral fellow in the Paleogenomics Lab at the University of California Santa Cruz.

While there are many potential ecological effects of the dwarf birch creeping farther north, Crump and her colleagues examined the climate feedbacks related to these shrubs covering more of the Arctic. Many climate models don't include these kinds of changes in vegetation, yet these taller shrubs can stick out above snow in the spring and fall, making the Earth's surface dark green instead of white--causing it to absorb more heat from the sun.

During the last interglacial period, between 116,000 and 125,000 years ago, these plants had thousands of years to adjust and move in response to warmer temperatures. With today's rapid rate of warming, the vegetation is likely not keeping pace, but that doesn't mean it won't play an important role in impacting everything from thawing permafrost to melting glaciers and sea level rise.

"As we think about how landscapes will equilibrate to current warming, it's really important that we account for how these plant ranges are going to change," said Crump.

As the Arctic could easily see an increase of 9 degrees Fahrenheit (5 degrees Celsius) above pre-industrial levels by 2100, the same temperature it was in the last interglacial period, these findings can help us better understand how our landscapes might change as the Arctic is on track to again reach these ancient temperatures by the end of the century.

Mud as a microscope

To get the ancient DNA they wanted, the researchers couldn't look to the ocean or to the land--they had to look in a lake.

Baffin Island is located on the northeastern side of Arctic Canada, kitty-corner to Greenland, in the territory of Nunavut and the lands of the Qikiqtaani Inuit. It's the largest island in Canada and the fifth-largest island in the world, with a mountain range that runs along its northeastern edge. But these scientists were interested in a small lake, past the mountains and near the coast.

Above the Arctic Circle, the area around this lake is typical of a high Arctic tundra, with average annual temperatures below 15 °F (?9.5 °C). In this inhospitable climate, soil is thin and not much of anything grows.

But DNA stored in the lake beds below tells a much different story.

To reach this valuable resource, Crump and her fellow researchers carefully balanced on cheap inflatable boats in the summer--the only vessels light enough to carry with them--and watched out for polar bears from the lake ice in winter. They pierced the thick mud up to 30 feet (10 meters) below its surface with long, cylindrical pipes, hammering them deep into the sediment.

The goal of this precarious feat? To carefully withdraw a vertical history of ancient plant material to then travel back out with and take back to the lab.

While some of the mud was analyzed at a state-of-the-art organic geochemistry lab in the Sustainability, Energy and Environment Community (SEEC) at CU Boulder, it also needed to reach a special lab dedicated to decoding ancient DNA, at Curtin University in Perth.

To share their secrets, these mud cores had to travel halfway across the world from the Arctic to Australia.

Once in the lab, the scientists had to suit up like astronauts and examine the mud in an ultra-clean space to ensure that their own DNA didn't contaminate that of any of their hard-earned samples.

It was a race against the clock.

"Your best shot is getting fresh mud," said Crump. "Once it's out of the lake, the DNA is going to start to degrade."

This is why older lake bed samples in cold storage don't quite do the trick.

While other researchers have also collected and analyzed much older DNA samples from permafrost in the Arctic (which acts like a natural freezer underground), lake sediments are kept cool, but not frozen. With fresher mud and more intact DNA, scientists can get a clearer and more detailed picture of the vegetation which once grew in that immediate area.

Reconstructing historic vegetation has most commonly been done using fossil pollen records, which preserve well in sediment. But pollen is prone to only showing the big picture, as it is easily blown about by the wind and doesn't stay in one place.

Now that they have shown it's possible to extract DNA that's over 100,000 years old, future possibilities abound.

"This tool is going to be really useful on these longer timescales," said Crump.

This research has also planted the seed to study more than just plants. In the DNA samples from their lake sediment, there are signals from a whole range of organisms that lived in and around the lake.

"We're just starting to scratch the surface of what we're able to see in these past ecosystems," said Crump. "We can see the past presence of everything from microbes to mammals, and we can start to get much broader pictures of how past ecosystems looked and how they functioned."

Arctic was once lush and green, could be again, new research shows 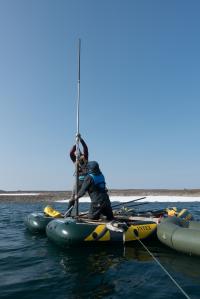