Researchers at the University of Calgary have discovered the unique genes that allow the opium poppy to make codeine and morphine, thus opening doors to alternate methods of producing these effective painkillers either by manufacturing them in a lab or controlling the production of these compounds in the plant.

"The enzymes encoded by these two genes have eluded plant biochemists for a half-century," says Peter Facchini, professor in the Department of Biological Sciences, who has dedicated his career to studying the unique properties of the opium poppy. "In finding not only the enzymes but also the genes, we've made a major step forward. It's equivalent in finding a gene involved in cancer or other genetic disorders."

The researchers' findings will be published in a paper entitled Dioxygenases catalyze the O-demethylation steps of morphine biosynthesis in opium poppy, appearing in the on-line edition of Nature Chemical Biology (http://www.nature.com/nchembio/index.html) on Sun., Mar. 14 at 2 pm ET / 6 pm London time.

Codeine is by far the most widely used opiate in the world and one of the most commonly used painkillers. Codeine can be extracted directly from the plant, most codeine is synthesized from the much more abundant morphine found in opium poppy. Codeine is converted by an enzyme in the liver to morphine, which is the active analgesic and a naturally occurring compound in humans. Canadians spend more than $100 million every year on codeine-containing pharmaceutical products and are among the world's top consumers of the drug per capita. Despite this, Canada imports all of its opiates from other countries.

"With this discovery, we can potentially create plants that will stop production at codeine. We are also working toward the synthesis of codeine and other opiate drugs more efficiently and economically in controlled bioprocessing facilities," says Facchini. "Our discovery now makes it possible to use microorganisms to produce opiate drugs and other important pharmaceuticals." One of the next steps for the research team is using the codeine gene to produce pharmaceuticals in yeast or bacteria.

Jillian Hagel, a post-doctoral scientist in Facchini's lab, was assigned the task of finding these key genes as part of her Ph.D. research. She succeeded using leading-edge genomics techniques that helped her sort through up to 23,000 different genes and ultimately find a gene called codeine O-dementhylase (CODM) that produces the plant enzyme converting codeine into morphine.

"That was an exciting day," Hagel says of her moment of discovery. "We have found the missing pieces that were needed to understand how the opium poppy makes morphine."

Facchini adds: "The evolution of these two genes in a single plant species has had such a huge impact on humanity over the past several thousand years. Our discovery allows this unique genetic power to be harnessed in many important ways." 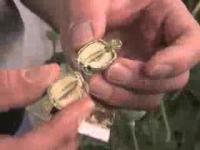