Tropical Storm Carlos approached the southwestern coast of Mexico over the past weekend of June 13-14, and satellite imagery shows the storm continues to hug the coast.

On Saturday, June 13, NASA's RapidScat instrument showed Carlos' sustained strongest winds were located southwest and north of its center. Those sustained winds were up to 35 mps (meters per second)/78.2 mph/126 kph. Carlos was a hurricane on June 13.

RapidScat is a scatterometer instrument that flies aboard the International Space Station and can measure surface winds over the ocean. Sustained winds around the rest of Carlos' center were near 20 mps/44.4 mph/72 kph). Those tropical storm-force winds were affecting Mexico's coast. The RapidScat image also showed that the low had good circulation.

On Monday, June 15, NOAA's GOES-West satellite captured an infrared image of Tropical Storm Carlos still hugging the southwestern Mexico coastline. The circulation appeared less structured than the previous two days on satellite imagery. There were still powerful thunderstorms surrounding the center of circulation, but the eye was not visible. Carlos is small cyclone. Tropical-storm-force winds only extend outward up to 45 miles (75 km) from the center.

At 8 a.m. EDT (1200 UTC), the center of Tropical Storm Carlos was located near latitude 16.9 North, longitude 102.3 West. Carlos was moving toward the west-northwest near 6 mph (9 kph). The NHC said that this general motion is expected to continue through Tuesday (June 16), followed by a turn toward the northwest on Wednesday. Maximum sustained winds remain near 70 mph (110 kph) with higher gusts. The estimated minimum central pressure is 988 millibars (29.18 inches).

The NHC forecast calls for Carlos to move in a northwesterly direction over the next couple of days, hugging the coast of Mexico. Some strengthening is expected and Carlos is forecast to become a hurricane again by early Tuesday, June 16. Shortly thereafter, Carlos Is forecast to weaken back into a tropical storm and finally to a depression on June 17 all the while remaining just off the west coast of Mexico. 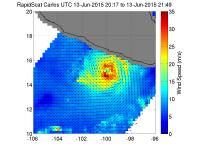