The origins of birds and their flight was a major event in the history of life. A wealth of spectacular fossils has demonstrated that birds are theropod dinosaurs, with Pennaraptora being the most relevant subgroup to transition from non-avian dinosaurs to birds. Here we announce the publication of a landmark journal volume on pennaraptoran theropods (Figure 1) edited by HKU Research Assistant Professor Dr. Michael Pittman (Vertebrate Palaeontology Laboratory, Division of Earth and Planetary Science & Department of Earth Sciences) and Prof. Xing Xu of the Institute of Vertebrate Paleontology and Paleoanthropology (IVPP) and the Chinese Academy of Sciences Center for Excellence in Life and Paleoenvironment (Beijing, China), who both specialise in these animals (see Notes).

Pennaraptora comprises of birds as well as the pennaceous feathered dromaeosaurids ('raptors'), troodontids, scansoriopterygids and oviraptorosaurians (Figures 2 and 3). Fossils and insights from living birds and crocodilians show that many important avian traits originated deep within theropod evolutionary history, accumulating over a significant period of time and portion of the evolutionary tree, often in a complex mosaic way. These traits include 'warm-bloodedness', unique reproductive strategies as well as flight itself. Key features necessary for flight appeared among pennaraptoran theropods including: a long, robust and sideways-facing arm; a refined "flight-ready" brain; and large, vaned flight feathers. Proxies for modern flight capability, modelling work and functional morphology support flight and near-flight capabilities among paravian pennaraptorans, with powered flight evolving independently multiple times.

Breaking new ground in the field

To deepen our understanding of avian and flight origins as well as other important pennaraptoran evolutionary events, the International Pennaraptoran Dinosaur Symposium (IPDS) was held at the University of Hong Kong between March 29 and April 1, 2018, to make substantial advances in our understanding of pennaraptoran palaeobiology and evolution (see Notes). These efforts culminated in a special volume just published in the prestigious journal Bulletin of the American Museum of Natural History, entitled 'Pennaraptoran Theropod Dinosaurs: Past Progress and New Frontiers', edited by Dr. Pittman and Prof. Xu. "The volume documents past progress, works toward consensus on key unresolved issues, breaks new ground in the field and identifies priority areas for future research", said Dr. Pittman. Asked about who was involved, Prof. Xu replied, "The volume involved 49 experts from more than 10 countries whose views cover much of the current discussion on pennaraptoran palaeobiology and evolution." The volume is made up of 14 chapters organised in three sections:

Section 1. Fossil Record, Systematics, and Biogeography surveys the pennaraptoran fossil record and draws attention to what new discoveries would help to answer pressing questions in the field. It also presents the current state of pennaraptoran evolutionary relationships (Figure 2), providing the context needed to understand pennraptoran evolution. This section includes the first quantitative analysis of the spatial distribution of coelurosaurian theropods through time (palaeobiogeography; Figure 3), which allowed key tectonic drivers of their evolution to be identified.

Section 2. Anatomical Frontiers focuses on recent discoveries in pennaraptoran anatomy, particularly of the hand and head (Figure 4). It explores the implications this knowledge has and will have on our understanding of pennaraptoran palaeobiology and evolution. These discoveries involve a wide range of adopted approaches, including geometric morphometrics, mechanical advantage calculations, and evo-devo approaches as well as the evolutionary context provided in section one.

Section 3. Early Flight Study: Methods, Status, and Frontiers begins by detailing the methods currently available for studying early theropod flight and discusses the priorities to address in future methodological development work. Then recent advances in soft-tissue imaging are married with quantitative methods of early flight study to create a new framework on which to build (Figure 5). This section also covers recent efforts to identify the small pennaraptorans that first took to the skies, what their flight capabilities were and how their flight might have been acquired. A new broader context is proposed for flight behaviour as part of a functional landscape. Wing-assisted incline running (WAIR), a behaviour seen in modern birds that is proposed as an early stage of flight development, is argued as a later innovation based on a study of modern ostriches.

Asked about the significance of the volume, contributor Dr. Daniel J Field of Cambridge University (Department of Earth Sciences) said, "This is a landmark volume that advances our understanding of pennaraptoran dinosaurs and identifies key areas to address in the years ahead." Contributor Dr. T Alexander Dececchi of Mount Marty University (Department of Biology) added, "The volume is of particular interest to dinosaur palaeontologists and ornithologists, but its findings will also excite the general public."

The volume is published in the Bulletin of the American Museum of Natural History and can be accessed here: http://digitallibrary.amnh.org/handle/2246/7237

1. Most close relatives of birds neared the potential for powered flight but few crossed its thresholds (Aug 2020): https://www.hku.hk/press/press-releases/detail/21405.html

4. HKU hosts international symposium on the origins of birds and flight and presents related display in the Stephen Hui Geological Museum (March 2018): https://www.hku.hk/press/press-releases/detail/17687.html

Bulletin of the American Museum of Natural History 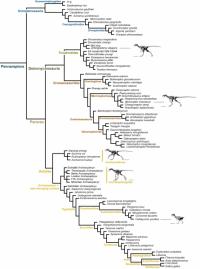