Scientists from North Carolina State University and the University of Florida have combined cookies, citizen science and robust research methods to track the diversity of ant species across the United States, and are now collaborating with international partners to get a global perspective on how ants are moving and surviving in the modern world.

"We think our School of Ants project serves as a good model for how citizen science can be used to collect more data, more quickly, from more places than a research team could do otherwise," says Dr. Andrea Lucky, a researcher at the University of Florida who started work on the School of Ants while a postdoctoral researcher at NC State and now heads the project. Lucky is co-lead author of a paper describing the work and its early findings. "And our protocols help ensure that the data we are collecting are high quality."

The School of Ants project was developed at NC State to help researchers get a handle on the diversity of ant species across the United States, with a particular focus on Chicago, Raleigh and New York City. In short, to discover which ant species are living where.

"But we also wanted to launch a citizen science project that both increased the public's ecological literacy and addressed criticisms that public involvement made citizen science data unreliable," says Dr. Amy Savage , a postdoctoral biological sciences researcher at NC State and the other co-lead author of the paper.

The researchers developed a simple protocol involving Pecan Sandies cookies and sealable plastic bags, detailing precisely how the public should collect and label ant samples before shipping them to NC State or UF. This process was designed to engage the public in the aspect of the research that was easiest for non-scientists to enjoy and participate in, while also limiting the chances that the public could make mistakes that would skew the findings.

Once the samples arrive at NC State or UF, they are sorted, identified by a team of national experts and entered into a database. That information is then made publicly available in a user-friendly format on the project's schoolofants.org site, allowing study participants to track the survey.

"This information is helping us tackle a variety of ecological and evolutionary questions, such as how ants may be evolving in urban environments, and how invasive species are spreading in the U.S.," Savage says.

More than 1,000 participants, with samples from all 50 states, have taken part in the project since its 2011 launch – and there have already been some surprising findings.

For example, the researchers learned that a venomous invasive species, the Asian needle ant (Pachycondyla chinensis), had spread thousands of miles farther than anyone expected. Researchers knew the species had established itself in the Southeast, but study participants sent in Asian needle ant samples from as far afield as Wisconsin and Washington state.

To build on the School of Ants model, the researchers have launched collaborations with counterparts in Italy and Australia.

"We're optimistic that this project will give us a broader view of ant diversity and how these species intersect with us, where we live and work around the world," Lucky says.

The researchers are also working with teachers to incorporate the project into K-12 instruction modules that incorporate key elements of common core education standards. One early teacher collaboration has led to a research paper co-written by 4th and 5th graders.

"We also collaborated with a science writer to produce a free series of iBooks featuring natural history stories about the most common ants that our citizen science partners are collecting in their backyards and sidewalks," Savage says.

"One of our big goals now is to move from collecting data and finding patterns to identifying ways that we can work with the public to figure out what is driving those patterns," says Dr. Rob Dunn, an associate professor of biological sciences at NC State and co-author of the paper.

The paper, "Ecologists, educators, and writers collaborate with the public to assess backyard diversity in The School of Ants Project," was published online July 7 in the open-access journal Ecosphere. Co-authors include Lauren Nichols and Leonora Shell of NC State; and Drs. Cristina Castracani, Donato Grasso and Alessandra Mori of the Università degli Studi di Parma. The research was funded National Science Foundation grant 551819-0654, with support from the Burroughs Wellcome Fund. 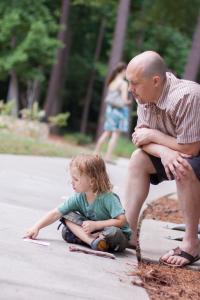 School of Ants in Action