Weizmann Institute scientists have demonstrated for the first time a photonic router – a quantum device based on a single atom that enables routing of single photons by single photons. This achievement, as reported in Science magazine, is another step toward overcoming the difficulties in building quantum computers.

"In a sense, the device acts as the photonic equivalent to electronic transistors, which switch electric currents in response to other electric currents," says Dr. Barak Dayan, head of the Weizmann Institute's Quantum Optics group, including Itay Shomroni, Serge Rosenblum, Yulia Lovsky, Orel Bechler and Gabriel Guendleman of the Chemical Physics Department in the Faculty of Chemistry. The photons are not only the units comprising the flow of information, but also the ones that control the device.

This achievement was made possible by the combination of two state-of-the-art technologies. One is the laser cooling and trapping of atoms. The other is the fabrication of chip-based, ultra-high quality miniature optical resonators that couple directly to the optical fibers. Dayan's lab at the Weizmann Institute is one of a handful worldwide that has mastered both these technologies.

The main motivation behind the effort to develop quantum computers is the quantum phenomenon of superposition, in which particles can exist in many states at once, potentially being able to process huge amounts of data in parallel. Yet superposition can only last as long as nothing observes or measures the system otherwise it collapses to a single state. Therefore, photons are the most promising candidates for communication between quantum systems as they do not interact with each other at all, and interact very weakly with other particles.

Dayan: "The road to building quantum computers is still very long, but the device we constructed demonstrates a simple and robust system, which should be applicable to any future architecture of such computers. In the current demonstration a single atom functions as a transistor – or a two-way switch – for photons, but in our future experiments, we hope to expand the kinds of devices that work solely on photons, for example new kinds of quantum memory or logic gates."

Dr. Barak Dayan's research is supported by the Benoziyo Endowment Fund for the Advancement of Science. Dr. Dayan is the incumbent of the Joseph and Celia Reskin Career Development Chair.

Weizmann Institute news releases are posted on the World Wide Web at http://wis-wander.weizmann.ac.il, and are also available at http://www.eurekalert.org. 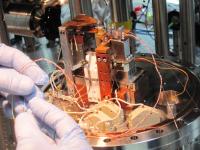