In the waning months of the First World War, a lethal virus known as the Spanish flu (influenza A, subtype H1N1), swept the United States, Europe and Asia in three convulsive waves. The year was 1918. The ensuing pandemic claimed up to 100 million victims, most of whom succumbed to severe respiratory complications associated with rapidly progressing pneumonia. Many died within days of the first symptoms.

In a new study, Carole Baskin, formerly assistant research professor at Arizona's Biodesign Institute, currently with Science Foundation Arizona, and an interdisciplinary team of collaborators, compared the recent avian strain known in the scientific community as H5N1, with genetic ressortants of the 1918 virus—source of the most severe influenza pandemic in recorded history. The results, which appear in the latest issue of the Proceedings of the National Academy of Science, are sobering. H5N1 was found to replicate profusely within the first 24 hours, causing severe damage to respiratory tissues while sending the host's innate immune response into a lethal overdrive, reminiscent of the trajectory of the original 1918 virus.

The threat of an avian flu pandemic hasn't gone away and emergency preparedness efforts may be inadequate to deal with the scope of such a pandemic, were one to occur. "In order to come up with vaccines and therapies, you have to understand the disease," Baskin stresses. "That's why I think this type of pathogenesis study is so important."

Although H5N1 is not readily communicable between humans, it has nevertheless killed over 400 people to date as a result of human-avian interactions, primarily in Vietnam, Thailand, China, Egypt and Indonesia, according to the World Health Organization. The mortality rate for those stricken with highly pathogenic avian influenza (HPAI) H5N1 is 63 percent. Should a series of modifications allow the virus to pass from person to person, the consequences for humankind could be catastrophic.

In the new study, Baskin and colleagues examine the host-pathogen responses to a common influenza virus and two ressortant strains of the 1918 H1N1 virus, each containing HA and NA—key surface antigens closely linked to the 1918 strain's potent virulence. The effects of these strains on host tissues and gene expression was compared with those of a 2004 Vietnam isolate of the Highly Pathogenic Avian Influenza (HPAI) H5N1. In a non-human primate model of the disease, the avian virus was found to significantly outpace not only run-of-the-mill influenza but even the highly virulent 1918 ressortants, in terms of its relentless pathogenicity.

Ressortant viruses occur when different influenza subtypes or strains simultaneously infect the same host. A shuffling and exchange of genetic material between two or more such viruses can occur under these conditions, giving rise to new viral forms which share genetic characteristics with each parent strain but may also possess novel attributes, including heightened virulence. (Researchers borrow this ressortant technique from nature in order to create deactivated viral strains for use in yearly influenza vaccines.)

Unlike typical seasonal flu which poses the greatest threat to juveniles, elderly and those with compromised immunity; the 1918 flu reserved the worst of its wrath for healthy young adults with robust immune systems. In the case of the avian H5N1 virus, statistics of human fatalities reveal a similar trend. In both cases, the highly pathogenic strains replicate rapidly and induce a massive transcription of genes associated with the innate immune response, the body's first line of defense for combating viral challenges.

The group sought to compare the 1918 flu strain with H5N1 through a systems biology approach, pioneered by Dr. Baskin's mentor, Michael G. Katze, Ph.D. at the University of Washington. Using this strategy, respiratory tissue was analyzed with high-throughput technologies of functional genomics, proteomics and transcriptomics to measure gene expression and regulation in fine-grained detail. Such techniques have opened a new window onto the genetic underpinnings of infectious disease.

A large number of these genes code for cytokines and chemokines—immunomodulating agents which include interleukins, interferons and other factors involved with the host's innate inflammatory response to infection. The result of this overwhelming transcription induction, shown graphically in figure 1, is a "cytokine storm" often leading to acute respiratory distress syndrome in the viral host, while proving entirely ineffective in blunting prodigious replication of the H5N1 virus.

Respiratory tissues sampled on days 1, 2 4 and 7 post-infection were subjected to pathological, viral and microarray analysis. Although the 1918 ressortant strains were found to be highly virulent, they were outmatched by H5N1's rapid onset, overwhelming transcription induction of cytokine and chemokine genes and headlong, sustained viral replication with wider distribution in the lungs. As Baskin notes, referring to the group's measurements of Tissue Culture Infectious Dose or TCID over the course of H5N1's infection, "the take home message is that for H5N1 there is hardly any viable tissue left to infect by day 7, yet there is still very strong viral replication." Further, despite the broad and sustained upregulation of inflammatory genes, they were of no use in limiting the H5N1 infection.

While the new study found that the 1918 ressortant strains and H5N1 each attacked specialized respiratory cells called pneumocytes, the 1918 chimaraes showed preference for so-called type I pneumocytes, responsible for air exchange in the lungs. In contrast, H5N1 characteristically infects the more numerous type II pneumocytes, a critical distinction, as Dr. Baskin explains: "Basically, when you injure type II pneumocytes as opposed to type I, you impair the ability of lung tissue to repair itself. In addition, when type II are infected, they produce chemokines and cytokines, which contribute directly to the overall inflammatory response." In this way, H5N1 delivers a devastating one-two punch to the host's ability to recover from the infectious siege. The researchers observed that within 24 hours, H5N1 had caused severe bronchiolar and alveolar lesions in lung tissue.

H5N1's penchant for infecting type II rather than type I pneumocytes is due to the receptor preference found in avian viruses as opposed to human viruses, (including the 1918 ressortants used in the study), which primarily attack type I cells in the lung.

H5N1's attack on type II pneumocytes was sustained, from the point of initial infection through the 7 days of the study, as seen in figure 2. Examination of lung tissue showed widespread, prolonged replication of viruses and associated tissue destruction. "The fact that the infection of type II pneumocytes was so protracted directly contributed to the damage we saw," notes Baskin.

Another aspect of lung function debilitated by H5N1 involves the loss of surfactants, produced by type II pneumocytes and responsible for pliability of lung tissue. Without such surfactants, breathing becomes impossible.

A further critical finding of the study is that H5N1, having swamped the innate immune response, turns its attention next to the body's adaptive response, specifically, dendritic cells whose job it is to phagocytize protein components from the virus and present these to T cells, either locally or at the lymph nodes that drain the lungs. Normally, through this process, specific antibodies are then produced to combat the viral infection. Tissue sampling for the H5N1 found a notable absence of these dendritic cells, suggesting they were destroyed during the infection process, which would point to H5N1's ability not only to disable the present infection but to block the body's ability to build immunity against later infection by the same type of virus.

Baskin points out that the new research presented to PNAS has been several years in the making, supported in part by her career award from the National Institute of Infectious Disease and by a large program project grant from the same. "The study was done at Battelle Biomedical Research Center, which had the required containment level, ABSL-3ag. These facilities are very rare and in great demand." Referring to the challenges of such complicated, long distance collaborations, she insists "you have to have just the right people to make something like this happen."

Continuing studies of host-pathogen responses at the tissue, cellular and molecular level may provide the understanding needed to stave off a viral pandemic, whether from H5N1 or some other emergent strain. Time is critical. Currently, the anti-viral known as Tamiflu, taken before or immediately after infection, offers the only known protection against highly pathogenic avian influenza and the first Tamiflu-resistant strains have already emerged.

In terms of how many modifications would be required for H5N1 to become a highly contagious human virus, Baskin expresses concern: "There have been some estimations and it's not a lot," she notes. "That's the short and simple answer."

Carole Baskin, formerly an assistant research professor at Arizona's Biodesign Institute, now a Program Director at Science Foundation Arizona, worked with a multidisciplinary team from Washington University, the CDC in Atlanta, Colorado State University, Battelle Biomedical Research Center in West Jefferson, Ohio, and Mount Sinai School of Medicine in New York. The research was supported by Battelle Internal Research and Development funds, and by several grants from the National Institute of Health.

About the Biodesign Institute at ASU

Shades of 1918? New study compares avian flu with a notorious killer from the past 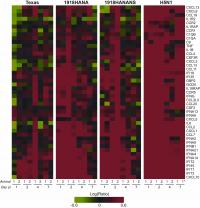 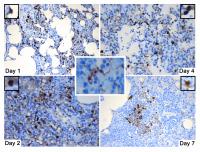