If you look deep into the eyes of a fish, it will tell you its life story.

Scientists from the University of California, Davis, demonstrate that they can use stable isotopic analysis of the eye lenses of freshwater fish -- including threatened and endangered salmon -- to reveal a fish's life history and what it ate along the way.

They conducted their study, published today in the journal Methods in Ecology and Evolution, through field-based experiments in California's Central Valley. The study carries implications for managing floodplains, fish and natural resources; prioritizing habitat restoration efforts; and understanding how landscape disturbances impact fish.

"Even the nerdiest fish biologists say, 'You can do what with fish eyes?'" said co-author and team co-lead Rachel Johnson, a research fisheries biologist with NOAA Fisheries' Southwest Fisheries Science Center and associate with the UC Davis Center for Watershed Sciences. "This is an exciting new tool we can use to measure the value of different habitats and focus conservation work."

THE EYES HAVE IT

Much like tree rings, fish eyeballs are archival. The lenses grow in layers throughout a fish's life, recording as chemical signatures the habitats used while each layer was forming and locking in the dietary value of what the fish ate in each habitat.

"It's like a little diet journal the fish keeps for us, which is really nice," Tilcock said.

To uncover that history, researchers perform what Tilcock said is "like peeling the world's tiniest onion." With fine-tipped forceps, they remove layer after layer, revealing a veritable Russian nesting doll of eye lenses. At the end is a tiny ball, like what you'd find in a silica packet, that can shatter like glass. This is the core, where the fish's eyes first began to develop.

Relative to other archival tissue, fish eyeballs are especially rich in protein. The isotopic values in the food webs bind to protein in the eye, leaving tell-tale geochemical fingerprints that isotopic analysis can uncover.

HABITAT IN THE EYES OF THE BEHOLDER

Scientists then conducted stable isotope analyses on the eye lenses of an adult salmon to reveal its diet history from birth to death. Stable isotopes are forms of atoms that don't decay into other elements and are incorporated into a fish's tissue through its diet. They can be used to trace origins, food webs and migratory patterns of species.

Taking the premise of "you are what you eat," the study's authors looked at the chemical crumbs of carbon, nitrogen and sulfur values in the eye lenses to determine which food webs and habitats the fish used at various life stages.

They found that fish on the floodplain grew quickly and appeared to grow additional laminae, or layers of lenses, during the 39-day study compared to fish reared in the river or hatchery. Also, the Yolo Bypass is home to rice fields, which decompose to add unique sulfur and carbon values -- a strong clue for researchers tracing which habitats fish use.

"This tool is not just unique to salmon in the Central Valley," Tilcock said. "There are many migratory species all over the world that need freshwater habitat. If you can isolate their habitat and value for diet, you can quantify it for long-term success."

For example, co-author and team co-leader Carson Jeffres, field and lab director at UC Davis' Center for Watershed Science, used the technique recently on fish in Brazil to look at changes in the food web there following a dam's construction.

EYES AND EARS WORK TOGETHER

Tilcock, Johnson and Jeffres are part of an "Eyes and Ears" project at UC Davis funded by the California Department of Fish and Wildlife. The project studies fish life history through eye lenses and otoliths, which are found within a fish's ears.

"You use the otolith to trace the river or hatchery where a fish was born based on the unique geology and water chemistry of the tributaries in the San Francisco Bay watershed," Johnson said. "Then you have the eye lens, which tells you where it's eating to help identify floodplain habitats."

"They really work together to present a fuller picture of how salmon move and what they eat as they use different mosaics of habitats across the landscape over their lifetime" said Jeffres. "Now we have the tool we have been looking for to link juvenile floodplain benefits across the salmon life cycle to adulthood. It's the holy grail of measuring restoration success."

Additional study co-authors include Andrew Rypel and George Whitman of UC Davis, Ted Sommer of the California Department of Water Resources, and Jacob Katz of CalTrout.

The study was funded by the California Department of Water Resources. 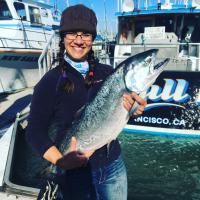 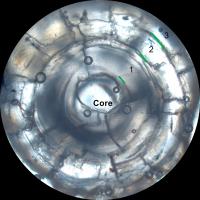