NASA's TRMM satellite data provided forecasters at the National Hurricane Center with a good look at how wind shear is affecting Tropical Storm Lorenzo in the Atlantic Ocean.

Forecasters at the National Hurricane Center (NHC) using data from NASA's Tropical Rainfall Measuring Mission satellite noted in the discussion on Oct. 23 at 5 a.m. EDT that the data from the TRMM satellite pass at 0247 UTC/10:47 p.m. EDT on Oct. 22 "nicely showed the separation of the low- and mid-level cloud features due to northwesterly shear. Despite the [wind]shear, Lorenzo is maintaining deep convection."

The Moderate Resolution Imaging Spectroradiometer instrument aboard NASA's Terra satellite captured a visible image of Tropical Storm Lorenzo on Oct. 22 at 14:30 UTC/10:30 a.m. EDT that showed the strongest thunderstorms in the eastern quadrant of the storm.

At 5 a.m. EDT on Oct. 23, Tropical Storm Lorenzo had maximum sustained winds near 50 mph/85 kph. The center of Lorenzo was located near latitude 29.6 north and longitude 49.2 west, about 940 miles/1,515 km east of Bermuda. Lorenzo is moving east near 8 mph/13 kph and is expected to turn northeast in the next day.

The NHC noted that Lorenzo will continue facing wind shear and will move into cooler waters, which will further sap its strength. In a couple of days, Lorenzo is expected to become a remnant low pressure area. 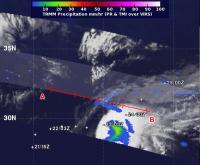