Our brains are complicated webs of billions of neurons, constantly transmitting information across synapses, and this communication underlies our every thought and movement.

But what happens to the circuit when a neuron dies? Can other neurons around it pick up the slack to maintain the same level of function?

Indeed they can, but not all neurons have this capacity, according to new research from the University of Chicago. By studying several neuron pairs that innervate distinct muscles in a fruit fly model, researchers found that some neurons compensate for the loss of a neighboring partner.

The results, published February 17, 2021, in the Journal of Neuroscience, are a step in the direction of understanding the plasticity of the brain and using that knowledge to better understand not only normal development, but also neurodegenerative diseases.

"Now that we know that some neurons can compensate when other neurons die, we can ask whether this process can also happen in neurological diseases," said Robert Carrillo, PhD, assistant professor of Molecular Genetics and Cell Biology and corresponding author of the paper.

Because the human brain is incredibly complex, researchers use the comparatively simple fruit fly model to investigate fundamental neuroscience concepts that could potentially translate to our higher-order brains.

To better understand how the brain adapts to structural and functional changes, Carrillo and graduate student Yupu Wang examined the fruit fly's neuromuscular system, where each muscle is innervated by two motor neurons. While it is known that neurons can alter their activity when perturbations happen at their own synapses, a process known as synaptic plasticity, they wondered what would happen if one neuron was removed from the system. Would the other neurons respond and compensate for this loss?

It's not an easy question to answer: Removing single neurons without simultaneously destroying other neurons is difficult, and it is also difficult to measure a single neuron's baseline activity. The researchers solved this by expressing cell death-promoting genes in a very specific subset of motor neurons. They then used imaging and electrophysiological recordings to isolate the activity of the single remaining neuron in the pair.

"It appears that some neurons have the ability to detect and compensate for their neighboring neuron, and others do not," said Wang, who is doing his graduate studies in the Committee on Development, Regeneration and Stem Cell Biology.

That could be because, as the researchers found, each neuron has different functional properties. The neuron that compensated for the loss of its neighbor also contributed most to the overall activity of the muscle under baseline conditions.

This still left the researchers with an intriguing question: How does the remaining neuron know how much to compensate? They hypothesized that the neuron pairs work together to establish a "set point" for activity upon circuit formation. Indeed, they found that if the neuron's neighbor never forms synapses - if the system never knew it was supposed to get information from two neurons - then the remaining neuron will not compensate.

That leaves hope that further studies could help illuminate whether neurons whose neighbors are affected by neurogenerative diseases like amyotrophic lateral sclerosis (ALS), which causes progressive neuron death and loss of muscle function, could show synaptic plasticity.

Next the researchers are studying the mechanism that causes the compensation. They hope to better understand how the signal that the neuron has died is sent, and how that signal in turn causes the other neuron to compensate.

The study, "Structural and Functional Synaptic Plasticity Induced by Convergent Synapse Loss in the Drosophila Neuromuscular Circuit," was supported by National Institutes of Health grants K01-NS-102342 and T32-GM-007183, the University of Chicago Biological Sciences Division, and the Grossman Institute for Neuroscience, Quantitative Biology and Human Behavior. Additional authors include Meike Lobb-Rabe, James Ashley and Veera Anand.

About the University of Chicago Medicine & Biological Sciences

The University of Chicago Medicine, with a history dating back to 1927, is one of the nation's leading academic health systems. It unites the missions of the University of Chicago Medical Center, Pritzker School of Medicine and the Biological Sciences Division. Twelve Nobel Prize winners in physiology or medicine have been affiliated with the University of Chicago Medicine. Its main Hyde Park campus is home to the Center for Care and Discovery, Bernard Mitchell Hospital, Comer Children's Hospital and the Duchossois Center for Advanced Medicine. It also has ambulatory facilities in Orland Park, South Loop and River East as well as affiliations and partnerships that create a regional network of care. UChicago Medicine offers a full range of specialty-care services for adults and children through more than 40 institutes and centers including an NCI-designated Comprehensive Cancer Center. Together with Harvey-based Ingalls Memorial, UChicago Medicine has 1,296 licensed beds, nearly 1,300 attending physicians, over 2,800 nurses and about 970 residents and fellows.

Study shows how some neurons compensate for death of their neighbors 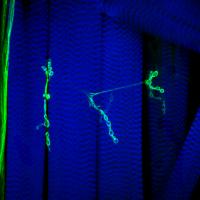