Satellite imagery has uncovered new evidence of a lost civilization of the Sahara in Libya's south-western desert wastes that will help re-write the history of the country.

The fall of Gaddafi has opened the way for archaeologists to explore the country's pre-Islamic heritage, so long ignored under his regime.

Using satellites and air-photographs to identify the remains in one of the most inhospitable parts of the desert, a British team has discovered more than 100 fortified farms and villages with castle-like structures and several towns, most dating between AD 1-500.

These "lost cities" were built by a little-known ancient civilisation called the Garamantes, whose lifestyle and culture was far more advanced and historically significant than the ancient sources suggested.

The team from the University of Leicester has identified the mud brick remains of the castle-like complexes, with walls still standing up to four metres high, along with traces of dwellings, cairn cemeteries, associated field systems, wells and sophisticated irrigation systems. Follow-up ground survey earlier this year confirmed the pre-Islamic date and remarkable preservation.

"It is like someone coming to England and suddenly discovering all the medieval castles. These settlements had been unremarked and unrecorded under the Gaddafi regime," says the project leader David Mattingly FBA, Professor of Roman Archaeology at the University of Leicester.

"Satellite imagery has given us the ability to cover a large region. The evidence suggests that the climate has not changed over the years and we can see that this inhospitable landscape with zero rainfall was once very densely built up and cultivated. These are quite exceptional ancient landscapes, both in terms of the range of features and the quality of preservation," says Dr Martin Sterry, also of the University of Leicester, who has been responsible for much of the image analysis and site interpretation.

The findings challenge a view dating back to Roman accounts that the Garamantes consisted of barbaric nomads and troublemakers on the edge of the Roman Empire.

"In fact, they were highly civilised, living in large-scale fortified settlements, predominantly as oasis farmers. It was an organised state with towns and villages, a written language and state of the art technologies. The Garamantes were pioneers in establishing oases and opening up Trans-Saharan trade," Professor Mattingly said.

The professor and his team were forced to evacuate Libya in February when the anti-Gaddafi revolt started, but hope to be able to return to the field as soon as security is fully restored. The Libyan antiquities department, badly under-resourced under Gaddafi, is closely involved in the project. Funding for the research has come from the European Research Council who awarded Professor Mattingly an ERC Advanced Grant of nearly 2.5m euros, the Leverhulme Trust, the Society for Libyan Studies and the GeoEye Foundation.

"It is a new start for Libya's antiquities service and a chance for the Libyan people to engage with their own long-suppressed history," says Professor Mattingly.

"These represent the first towns in Libya that weren't the colonial imposition of Mediterranean people such as the Greeks and Romans. The Garamantes should be central to what Libyan school children learn about their history and heritage."

Set up in 2007 by the EU, the European Research Council is the first pan-European funding organisation for frontier research. It aims to stimulate scientific excellence in Europe by encouraging competition for funding between the very best, creative researchers of any nationality and age. The ERC also strives to attract top researchers from anywhere in the world to come to Europe. The ERC two core funding schemes are the 'ERC Starting Grants' for younger, early-career top researchers and the 'ERC Advanced Grants' for senior research leaders. This year, two smaller initiatives were added, namely the 'ERC Proof of Concept' scheme for researchers already holding an ERC grant and the 'ERC Synergy scheme', targeting small groups of principal investigators working together on one project.

The ERC operates according to an "investigator-driven", or "bottom-up", approach, allowing researchers to identify new opportunities in any field of research. Since its launch, the ERC has funded over 2,200 frontier research projects throughout Europe and has become a "benchmark" of the competitiveness of national innovation systems as it complements existing funding schemes at national and European levels.

The ERC, which is the newest, pioneering component of the EU's Seventh Research Framework Programme, has a total budget of €7.5 billion from 2007 to 2013. It is led by the ERC Scientific Council, composed of 22 top scientists and scholars. The ERC President is Prof. Helga Nowotny. The Scientific Council's representative in Brussels is the Secretary General, Prof Donald Dingwell. The ERC Executive Agency implements the "Ideas" Specific Programme and is lead by Director (ad. int.) Pablo Amor.http://erc.europa.eu/

The Leverhulme Trust was established in 1925 under the Will of the first Viscount Leverhulme. It is one of the largest all-subject providers of research funding in the UK, distributing funds of some £50 million every year. For further information about the schemes that the Leverhulme Trust fund visit their website at http://www.leverhulme.ac.uk

The British Academy was established by Royal Charter in 1902, under the full title of 'The British Academy for the Promotion of Historical, Philosophical and Philological Studies'. It is an independent and self-governing fellowship of scholars, elected for distinction and achievement in one or more branches of the academic disciplines that make up the humanities and social sciences, and is now organised in eighteen Sections by academic discipline. There are Fellows, overseas Corresponding Fellows, and Honorary Fellows. Up to thirty-eight new Fellows may be elected in any one year.

The British Academy is the national academy for the humanities and the social sciences, the counterpart to the Royal Society which exists to serve the natural sciences. The Academy aims to represent the interests of scholarship nationally and internationally; to give recognition to excellence; to promote and support advanced research; to further international collaboration and exchange; to promote public understanding of research and scholarship; to publish the results of research. http://www.britac.ac.uk

The Society for Libyan Studies is a British academic body, sponsored by the British Academy, which since 1969 has fostered and developed links between British and Libyan scholars in a wide range of fields including the natural sciences, linguistics, archaeology, history and geography.

The GeoEye Foundation is a 501(c)(3) non-profit organization established on the belief that we have a social responsibility to share GeoEye's technology and resources to help train others to map, monitor, and measure the Earth.

Castles in the desert - satellites reveal lost cities of Libya 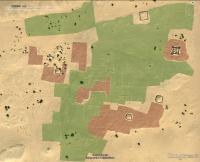