NASA's TRMM satellite peered into the clouds of Hurricane Henriette as is continues moving through the Eastern Pacific Ocean, and found powerful thunderstorms that topped 10 miles high.

TRMM is able to measure rainfall occurring in a storm from its orbit in space. Rainfall is derived from TRMM's Microwave Imager and Precipitation Radar instruments. TRMM's PR instrument measured rain falling at the rate of over 55.46 mm (~2.2 inches) per hour a towering thunderstorm near Henriette's center.

At NASA's Goddard Space Flight Center in Greenbelt, Md. the TRMM team used the satellite's data to create 3-D images and animations. One 3-D image looking toward the east from TRMM PR data revealed that towering storms in the northeastern side of Henriette's eye were reaching heights of almost 16.75km (~10.41 miles). This kind of chimney cloud, also called a "hot tower" (as it releases a huge quantity of latent heat by condensation) can play a part in the formation or intensification of tropical cyclones. Intense rainfall in Henriette's eye wall was returning values greater than 48.7dBZ to the TRMM satellite.

This 3-D image (looking toward the east) from TRMM PR data reveals that towering storms in the northeastern side of Henriette's eye were reaching height of almost 16.75km (~10.41 miles). 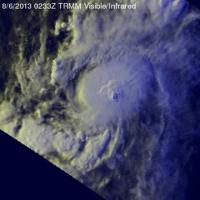