Doctoral student Ayasha Akter (Kobe University's Graduate School of Agricultural Science) and technical staff member Satoshi Takahashi (from the RIKEN Center for Sustainable Resource Science) have revealed the important role played by the histone modification H3K27me3 in regulating gene expression in Chinese cabbage. In addition, they illuminated the role of H3K27me3 in vernalization- a vital process for enabling Brassica rapa vegetables, such as Chinese cabbage, to flower.

These results were initially published online the journal 'DNA Research' on October 17 2019.

Histones are proteins that play a role in gene regulation- they also package DNA into structures called nucleosomes. A nucleosome is a section of DNA that is wrapped around a core of eight histone proteins- this core is known as a histone octamer (Figure 1). Histone methylation is a process whereby certain amino acids in a histone protein are modified by the addition of one, two or three methyl groups. Methylation of histones changes the packaging of the DNA and allows transcription factors or other proteins to access the DNA and turn the genes 'on' or 'off'. In this way, histones can change gene expression but not the DNA sequence. This is known as an epigenetic change. In the case of H3K27me3, the methylation of the H3 family histone targets the lysine residues (K27). H3K27me3 is often associated with gene silencing.

The whole genome sequence for Chinese cabbage (Brassica rapa L.) has been available since 2011. However, the exact role that H3K27me3 plays was not well understood. This study revealed the importance of H3K27me3 in vernalization- the process by which Chinese cabbage flowers after cold exposure.

For this study, two inbred lines of Chinese cabbage were used (T23 and T24). These lines were selected to investigate the role of H3K27me3 in tissue-specific gene expression because they are genetically similar to the reference whole genome sequence that was discovered in 2011. The research team compared the number of genes marked by H3K27me3 between the two lines, and between different tissues. They found that the distribution of H3K27me3 was similar between the two lines. However, there was greater variation in H3K27me3 distribution across different tissues within a line. In other words, it was found that genes with H3K27me3 marks showed tissue-specific expression (Figure 2). This suggests that this histone modification plays a role in the regulation of gene expression during plant tissue development.

Chinese cabbage is from the same Brassica genus of plants as Arabidopsis thaliana. Therefore, the researchers decided to compare the presence of H3K27me3 in these closely related plants. It was found that 40% of the modified genes in the two species were altered in a similar way by H3K27me3, suggesting that these modifications remained after speciation. This showed that H3K27me3 modification plays a vital role in both species.

Lastly, an experiment was conducted to see how H3K27me3 levels changed before and after vernalization. Vernalization refers to the process in which some varieties of plant flower after a period of exposure to cold weather.

In a previous study, it was revealed that the gene FLOWERING LOCUS C (FLC) plays a key role in preventing vegetables in the B. rapa family from flowering before vernalization. The expression of the FLC gene ensures that the plant cannot flower before it is exposed to cold weather- this helps prevent the plant from flowering in winter. The FLC gene is repressed when the plant undergoes a cold period- allowing it to flower once temperatures become warmer.

To mimic the conditions for vernalization, Chinese cabbage and Arabidopsis thaliana plants were kept at low temperatures of 4°C for a 4 week period. The results found that there were no large changes in H3K27me3 levels at a genome level. However, H3K27me3 accumulated in the FLC genes of both species after cold exposure. In Chinese cabbage, it was observed that H3K27me3 accumulated near FLC transcription initiation sites. In other words, H3K27me3 levels were high where the FLC genes were turned 'off'. When normal growing temperatures returned (22°C), H3K27me3 spread along the entirety of the FLC paralogs. This suggests that H3K27me3 also plays an important role in ensuring that the FLC gene remains repressed after vernalization.

Overall, this research illuminated that the histone modification H3 lysine 27 tri-methylation plays important roles in regulating the expression of genes responsible for tissue differentiation. They also revealed the indispensable role of H3K27me3 in controlling the expression of FLC during vernalization.

Further research into the role H3K27me3 plays in individual genes, as well as into any differences between H3K27me3 levels in different cultivars would deepen understanding around the role of this histone modification.

If successful, experiments in using H3K27me3 to suppress FLC could enable flowering time to be controlled artificially. This knowledge could be utilized in agriculture to improve the cultivation rates of vegetables in the B. rapa family.

Arabidopsis thaliana: Also known as thale cress, it is a small flowering plant (angiosperm) in the Brassicaceae (mustard) family. The whole genome sequence for this plant has been available since 2000, meaning that it is often used as a model in plant biology research studies investigating gene functions and mechanisms.

Transcription factors: are proteins that help turn specific genes (and their functions) 'on' or 'off'. 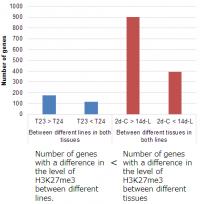