Playing back recorded audio from a digital storage allows us to enjoy music without the physical presence of a musical instrument to generate resonating sound. In a seemingly unrelated area called metamaterials, scientists design different physical structures also resonating with sound or light, to achieve many intriguing phenomena such as negative refraction and invisibility.

Recently, scientists from the Hong Kong University of Science and Technology (HKUST), in collaboration with Seoul National University in Korea, have realized what they called a virtualized acoustic metamaterial, in digitizing material response to an impulse response stored in a software program. Such a digital representation is common in signal processing to construct filters but now as a new application to material science. The digital representation replaces the previous physical structures, leaving only a collection of microphones and speakers inter-connected with a backend microprocessor. The impulse response of the metamaterial is now simply a software program in generating any scattered wave with a tailor-made frequency dispersion. As such, the response of metamaterials can be made arbitrary and flexibly tuned by simply a click of button.

Their findings were published in the journal Nature Communications on January 14, 2020.

"Current approach in metamaterial research mimics the response of natural atoms by artificially constructed ones using resonating physical structures. But that suffers for a long time a limitation that the property cannot be tuned easily in a large range and in a dynamical fashion," said Prof. Jensen LI Tsan-Hang of the Department of Physics, HKUST, who led the research. "This is particularly important for many realistic applications, such as a broadband stealth, that has to work in a dynamic and in a stringent environment."

While metamaterials have been showing high commercial values in terms of their superior performance in soundproofing, making compact meta-lens, etc., such a virtualization technology will further add huge tunability in terms of functions, assigning another level of meaning to "meta", and allowing metamaterials to do broadband stealth, active sound absorption, super-resolution imaging, and beyond.

"With our approach, we can easily go into the active regime of metamaterials, in addition to the tunability we have mentioned. External electronics, in comparing to conventional metamaterials that consist of passive physical structures, can always provide power to the metamaterials," said Prof. Namkyoo PARK, of the Department of Electrical and Computer Engineering, Seoul National University. "We are not restricted to metamaterials that can only be passive or dissipating power; any active response can be specified easily. We prove this in our work by realizing a metamaterial with amplified transmission much larger than value one."

The next step of the research group will involve building up a much larger version of meta-atoms of a metamaterial, which will allow researchers to further manipulate sound waves with properties that go beyond the current generation of metamaterials, such as broadband invisibility, extreme non-reciprocal transmission or sound proofing.

Virtualized metamaterials open door for acoustics application and beyond 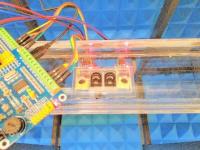