Parkinson's disease, a progressive nervous system disorder that affects movement, causes one of the highest risks of falling among all neurological conditions. Due to this, many patients develop a fear of falling (FOF), even if they have never fallen. For some the fear can be excessive. Patients become prisoners in their own homes, scared to venture out despite the fact that they are physically able to do so. Others can develop a "fearlessness" putting themselves at high risk of falling.

Vivien Poon was diagnosed with Parkinson's 10 years ago. She walks with the use of a cane and says her fear of falling is something she has to deal with on a daily basis. "I'm pretty lucky. Although I've fallen many times, I've only broken a finger. For a lot of patients, falls lead to serious injury," says Poon.

"The findings indicate the current standard treatment for fear of falling may not be effective for all patients. Many may benefit from treatments aimed at addressing their fear and improving their level of confidence to get up and be active," says Hu, professor in the departments of Clinical Neurosciences and Cell Biology and Anatomy and member of the Hotchkiss Brain Institute.

"Some patients have developed an excessive fear of falling that's keeping them from participating in activities, but physically, they have no reason to be afraid," says Hu. "On the opposite end of the spectrum we discovered patients who are physically at a high-risk of falling, but cognitively don't recognize their weaknesses and aren't taking proper precautions."

The researchers incorporated machine learning to compare cognitive and mobility tests from 57 patients. This aspect of artificial intelligence allows computer systems to learn from the data and find hidden patterns. The algorithms produced visual maps that helped separate the patients with FOF into different categories: those with mobility issues, those with cognitive dysfunction with relatively mild motor impairment, and those with a combination of the two. The study is published in the Nature Partner Journals npj Parkinson's Disease.

"Up to now there has been no generally accepted scientific method that can be used to diagnose patients with different types of fear of falling," says Chomiak, an adjunct assistant professor in the Department of Clinical Neurosciences. "This is the first step toward the development of an effective diagnostic tool to identify types of FOF that combines conventional clinical assessments with mobile and computer technology."

Parkinson's disease is difficult to treat. The symptoms and progression of the disease are unique to each individual. People with the disease can have problems controlling their body; tremors and muscle weakness are common symptoms. They can also experience cognitive impairment, including loss of memory, anxiety and depression. There is no cure.

This research is supported by the Canadian Institutes of Health Research and Alberta Innovates.

Led by the Hotchkiss Brain Institute, Brain and Mental Health is one of six research strategies guiding the University of Calgary toward its Eyes High goals. The strategy provides a unifying direction for brain and mental health research at the university and positions researchers to unlock new discoveries and treatments for brain health in our community. 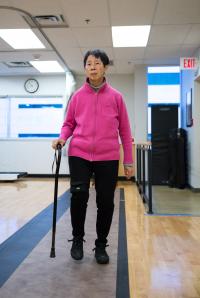