A new paper published in the Journal of Near Eastern Studies presents the results of and images from the resuming of the archaeological seasons in the Mons Smaragdus region in the Egyptian Eastern Desert. The region is known for Roman-era emerald mines, chronicled by authors like Pliny the Elder and Claudius Ptolemy, were rediscovered in the 19th century by the French mineralogist Fréderic Cailliaud. During the 1990s a team from the "Berenike Project" started to survey the area and conducted the first excavations, focusing on the main site identified, Sikait, where the archaeological seasons resumed in January of 2018 and January 2020.

In "New evidence regarding emerald production in Roman Egypt coming from Wadi Sikait (Eastern Desert)" authors J. Oller Guzmán, D. Fernández Abella, V. Trevín Pita, O. Achon Casas, and S. García-Dils de la Vega detail what was found in three buildings. The first structure, referred to as the "Administrative building," was likely a temple long occupied between the 1st and the 4th-5th centuries. Nineteen coins were recovered at the site, along with other items indicating ritual use like incense burners and bronze and steatite figurines. The "Large Temple," one of the most well-preserved structures standing in Sikait, also contained religious artifacts like bones, terracotta body parts, and amulets, and was likely occupied between the 4th and the 5th centuries AD, although inner shrines were possibly used earlier, based on surviving traces of Egyptian hieroglyph and other materials. Finally, the "Six Windows Building" complex, possibly a residential space, included an older inner cavity, which may have been related to mining activity. However, concerning this type of structures, common in Sikait, the authors write, "After analyzing most of these spaces, we can conclude that almost none of them can be identified as beryl mines, and mainly we are dealing with storage or living spaces." Nevertheless, the study of the underground structures presents in Sikait and the surrounding areas allowed the documentation of several beryl mining spaces. The detailed analysis of some mines showed relevant evidence concerning their structure, typology, and evolution, including the discovery of the first register inscription ever found in an ancient emerald mine.

These excavation seasons, the authors write, add to knowledge about emerald production in Roman Egypt. "First, it confirmed the significance of the religious aspect in mining settlements like ancient Senskis." This shows the importance of the settlement within the emerald mining network, as there is no other site in which a similar concentration of cult spaces has been recorded. "This links Sikait to other productive regions in the Eastern Desert, which also offer plentiful evidence of the importance of cult and religion, like the imperial quarries."

The authors propose this work will provide key evidence in the future for determining how exactly were the mines exploited. Future seasons will focus on documenting the mining complexes to get a complete overview of the process of extraction and commercialization of emeralds, which will provide greater historical context. "According to literary sources such as Olympiodorus, in the 5th century AD a permit from the king of the Blemmyes was required to enter the emerald mines." Considering that most of the surviving structures in Sikait date to this period, archaeological information from such sites are fundamental for understanding the progressive abandonment of the Roman/Byzantine control in this area and the gradual substitution by the Blemmyan power.

Journal of Near Eastern Studies 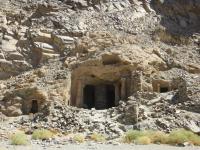